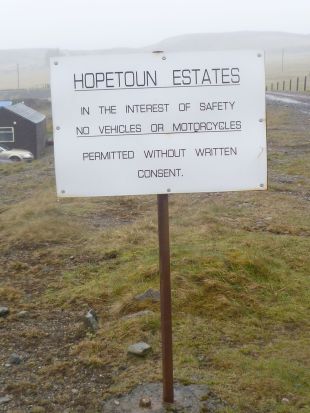 This post is a continuation from Leadhills & Hopetoun: getting closer to the truth? Part 1 (see here).

So, thanks to help from the ever-resourceful Andy Wightman (website here) and another contributor who wishes to remain anonymous, we’re now in a position to examine some of the statements made by the Earl of Hopetoun and his spokesman, about the relationship between Hopetoun Estate and Leadhills Estate.

Let’s start with a statement made by the Earl himself, in a letter he wrote to the Scotsman in March 2012 (see here). His letter was in response to an earlier Scotsman article about the Hopetoun / Leadhills relationship (see here).

Now take a look at the photograph accompanying this post. This was sent in by a Leadhills village resident, who says it’s one of two signs in the village. The contributor wrote this: “I can assure that nobody in Leadhills (I live in Leadhills) refers to the estate as “the Leadhills Estate”. Locals have always known it as “the Hopetoun Estate”.

Hmm. Perhaps the apparent inaccuracy of the Earl’s statement is just a result of an absent landlord not really in tune with local views, as opposed to an attempt to distance Hopetoun Estate from Leadhills Estate? You can draw your own conclusions.

Let’s now take a look at the detail of the shooting lease between Hopetoun and Leadhills Sporting Ltd that covers the management of the Leadhills Estate grouse moor. Please bear in mind what we said in Part 1: the lease we are examining was acquired from the Land Register in September 2008, two months after the change of Directors at Leadhills Sporting Ltd. This lease may not be the lease in current use. (Incidentally, a contributor is sending us a copy of the lease he acquired in 2011 so when we receive that we can compare and contrast the content of both copies to see what, if anything, has changed).

Before we start, it’s worth reminding ourselves of the statement published on the Deadline News website (here) attributed to the Earl of Hopetoun’s spokesman:

It’s similar to a statement the Earl made in his letter to the Scotsman:

“I must underline the view of the RSPB spokesman in stating that there is a long-term sporting lease in place at Leadhills and that Hopetoun does not have any responsibility for the shooting there”.

The lease makes for a fascinating read, once you get to grips with the obligatory long-winded legal jargon and the cramped-up presentation of the clauses. It tells us, amongst other things, how much rent the Tenant (Leadhills Sporting Ltd) has to pay to the Landlord (Hopetoun), and how much additional rent must be paid if the three year rolling average of grouse shot in each season exceeds 1,750 brace (3,500 birds). It tells us how many days of walked-up and driven grouse shooting the Landlord is entitled to, as well as how many walked-up rabbit shooting days and how many guests he is permitted for each day. It tells us that the Tenant must comply with the provisions of the Wildlife & Countryside Act 1981 and all other statutory provisions affecting the preservation of wildlife. It tells us that the Tenant shall permit a minimum of three and a maximum of four of the gamekeepers employed by the Tenant to assist the Landlord with the Landlord’s pheasant shoot in West Lothian for a maximum of five days in each pheasant shooting season. It even tells us how many coats of paint, and the type of paint, the Tenant must use periodically to maintain the interior and exterior of buildings.

So, it’s quite a detailed lease but its thoroughness is probably no different to thousands of other leases whereby a Landlord wants to ensure his Tenant keeps his property in good order. The bit about permitting 3-4 of the Tenant’s gamekeepers to assist on the Landlord’s pheasant shoot in West Lothian is perhaps a bit unusual but none of the above clauses give us any reason to doubt that Hopetoun “has no role whatsoever in the management of Leadhills Estate”. And indeed, the Earl’s stated condemnation of wildlife crime is supported by the inclusion of the clause about compliance with the relevant legislation.

All good then?  Well, almost. There are several clauses that deserve closer attention:

The Tenant shall produce a management regime and programme of improvements in respect of the Grouse Moor to be specified in a draft management plan within six months of the Date of Entry. The said draft management plan shall take account of the presumptions in the foregoing Clause 5.7 [these relate to “effective” vermin control, a “proper” heather-burning regime, road, lunch hut & butt maintenance, habitat management, heather improvement policies, provision of equipment for gamekeepers, H&S policy and an “appropriate” shooting policy] and shall thereafter be adjusted and agreed between the parties. The agreed management plan (“The Management Plan”) shall be revised and updated at the fifth anniversary of the Date of Entry and every five years thereafter such revisals to be adjusted and agreed between the parties.

The Tenant shall meet with the Landlord/Landlord’s agent (unless otherwise agreed) twice yearly in January and July when the parties will review the Management Plan, the current and proposed works pertaining to the Let Subjects and the Grouse Moor and all matters pertinent to the management of a top class driven grouse moor.

The Landlord shall be entitled to resume the Shooting Right for any purpose from any part of the Grouse Moor subject to a limit of 100 acres in total for the duration of this lease.

1) This lease shows that the Landlord (Hopetoun) has to approve the hiring of any new Head Keeper at Leadhills Estate for the first 15 years of the lease. Wouldn’t that count as being involved in the sporting management of Leadhills Estate?

2) This lease shows that after the 15th year, the Landlord (Hopetoun) will jointly undertake (with Leadhills Sporting Ltd) the whole selection process for the employment of a new Head Keeper. Wouldn’t that count as being involved in the sporting management of Leadhills Estate?

3) This lease shows that the Landlord (Hopetoun) will jointly discuss the draft management plan with the Tenant and will adjust and agree its content. Wouldn’t that count as being involved in the sporting management of Leadhills Estate?

4) This lease shows that the Landlord (Hopetoun) will jointly revise and update “The Management Plan” at the 5th anniversary and every five years afterwards. Wouldn’t that count as being involved in the sporting management of Leadhills Estate?

5) This lease shows that the Landlord (Hopetoun) or his agent will meet twice yearly with the Tenant to review “The Management Plan” and “all matters pertinent to the management of a top class driven grouse moor”. Wouldn’t that count as being involved in the sporting management of Leadhills Estate?

6) This lease shows that the Landlord (Hopetoun) can have shooting rights of up to 100 acres of any part of the moor for the duration of this lease. If this entitlement is used, wouldn’t that count as being involved in the sporting management of Leadhills Estate?

Here’s a copy of the lease so you can read it and draw your own conclusions: LAN171259[1] Read from page 9 onwards.

We’ll re-visit this issue once we’ve received the lease dated 2011.

9 thoughts on “Leadhills & Hopetoun: getting closer to the truth? Part 2”