Two days before Christmas the Scottish Government published its annual wildlife crime report, the seventh since it became a statutory obligation under the Wildlife and Natural Environment (Scotland) Act 2011 for Ministers to lay a report on wildlife crime at the end of every calendar year.

The current report is entitled the ‘2018’ report, but it actually refers to wildlife crimes recorded from April 2017 to March 2018.

The report can be downloaded here: wildlife-crime-scotland-2018-annual-report 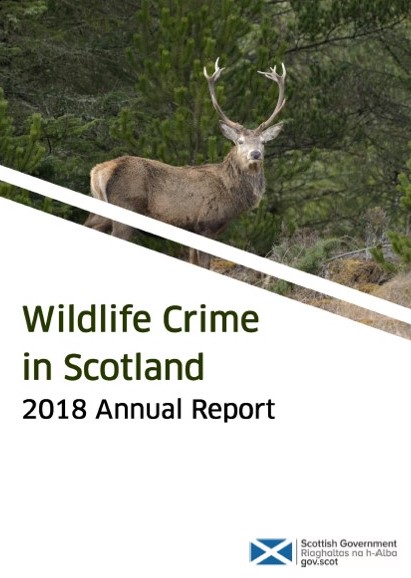 And all the more shocking that this doubling in increase took place at exactly the same time that the Werritty Review was underway – you’d think that the criminals within the grouse shooting industry would have had the sense to ease off whilst under such close scrutiny, at least until the review was completed. But no, they’re either too stupid or, more likely, too arrogant to care, knowing full well the chance of being caught and prosecuted is virtually nil.

We’ll be looking at the game shooting industry’s response to this report in later blogs.

Ian Thomson of RSPB Scotland was quoted in the press as saying the increase in reported raptor persecution crimes is of “significant concern“. He also said,

“This shows very clearly that the targeting of our raptors continues unabated, particularly on intensively managed grouse moors.

The repeated and ongoing suspicious disappearance of satellite-tagged birds of prey, almost exclusively on or adjacent to areas managed for driven grouse shooting demonstrates very clearly that the Scottish Government needs to expedite the robust regulation of this industry“.

The report’s foreword has been written by Environment Secretary Roseanna Cunningham and it’s well worth a read as she acknowledges the crime stats are a likely underestimate of the true scale, particularly as wildlife crime on remote grouse moors is difficult to detect without witnesses. It’s an obvious point but one that does need to be repeated.

She also makes the important and significant point of discussing the ‘missing’ satellite tagged raptors (two golden eagles + six hen harriers) that vanished during this period. These missing birds are not included in the ‘official’ crime stats because without a body the police are unable to record the disappearance as a crime (which is why so many simply disappear without trace – the criminals know how to play this game) but she says of the sudden suspicious losses, “These circumstances strongly suggest that many of these incidents may be the result of illegal killing of these birds“.

The rest of the foreword makes no commitment to taking forward any specific action, which is hugely disappointing. Roseanna simply acknowledges that there’s still an ongoing issue and repeats the now familiar mantra that the Scottish Government is still committed to tackling it, but doesn’t map out how, apart from talking about increased penalties for wildlife crime, which we’ve already had to wait six years for and they’re still not here yet. Perhaps this vagueness is unsurprising given that we’re now waiting to hear the Government’s formal response to the Werritty Review and the specific actions it intends to take. Apparently we’ll learn details of that response ‘in due course‘, widely expected to be April.

The timing of the publication of this wildlife crime report was pretty poor – two days before Christmas isn’t ideal, although it did get some coverage in the Scotsman the following day on Christmas Eve. In response, Mark Ruskell MSP, the Scottish Green’s Environment spokesperson, suggested the Government was ‘trying to bury bad news’. It’s a fair point.