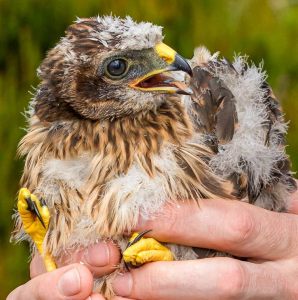 Hen harrier ‘Rowan’ was one of two harriers satellite-tagged by the Hawk & Owl Trust at Langholm in the summer of 2016.

On 28 October 2016, a joint press release issued by Natural England and the Hawk & Owl Trust revealed he had been found dead in Cumbria / Yorkshire Dales National Park on 22 October 2016. We weren’t told the circumstances of his death but the press release did say: ‘Following an autopsy, Natural England has passed details to the police for investigation‘, so it was pretty obvious that criminal activity was suspected.

Take note of the date because this is important (we’ll come back to this in Part 2). This vague press release appeared on the Friday before the Westminster debate on driven grouse shooting on the Monday (31 October).

The next press release was issued by Cumbria police on 7 November 2016. It was slightly more informative than the first press release, but still quite vague. This press release included the sentence:

‘A post-mortem examination funded by Natural England and carried out by the Zoological Society of London has established that the bird was likely to have been shot‘.

At the time we questioned the wording of the police statement and suggested it was odd to say the bird ‘was likely to have been shot’ because it’s not a phrase often used in a post mortem report. Typically, a report will say something like ‘the injuries are consistent’ with the bird being shot. Unfortunately, Cumbria police chose not to publish an x-ray of the dead bird, which would have clarified the situation; again, this was unusual and raised our suspicions.

We’ve since done some digging through a series of FoIs and it seems we were right to be suspicious. Little did we know what a trail of collusion, cock-up and cover-up we’d discover.

Part 2 of this blog will appear shortly……

UPDATE: Part 2 can be read here