A teenager has been arrested today following two warrants executed in East Wiltshire.

Led by the Wiltshire Rural Crime Team but supported by local officers, officers from Hampshire Constabulary, South West Forensics, the Royal Society for the Protection of Birds (RSPB), the National Wildlife Crime Unit, Natural England and the Wiltshire Fire and Rescue Service, warrants were executed at locations in the Pewsey and Beckhampton areas.

A 19-year-old man was arrested on suspicion of raptor persecution under the Wildlife and Countryside Act.

Firearms were seized as part of ongoing enquiries, and the carcasses of a number of birds of prey, including red kites and buzzards, were located at the location in Beckhampton.

PC Marc Jackson, Wiltshire Police Rural Crime Team, said: “Following an extensive search of both locations, we have recovered the remains of a number of birds of prey, including red kites and buzzards.

“The recovery of these remains presented a number of complex challenges and we are grateful for the support from other agencies.

“Our enquiries continue into how these birds were killed and disposed of. If anybody has any information that they think could support our investigation, please contact us on 101.”

Inspector Liz Coles, Tactical Lead for Rural Crime in Wiltshire, said: “Today’s warrant shows that we take all aspects of rural crime seriously and we will proactively work with partners to protect wildlife and our rural communities.

“Last week saw the introduction of the new dedicated rural crime officers to the team, and this is a prime example of how they will help us moving forward.

Wiltshire Police are part of the national initiative called Operation Owl. The initiative sets out to raise awareness of raptor persecution, encouraging the public to be vigilant for signs of this criminal activity, and to report suspicious activity to the police.

Well now this doesn’t look good for Natural England’s ridiculous project to ‘reintroduce’ hen harriers to southern England, does it? And after all that work they’ve done trying to convince potential donor countries that raptor persecution is no longer an issue in southern England (e.g. see here and here). 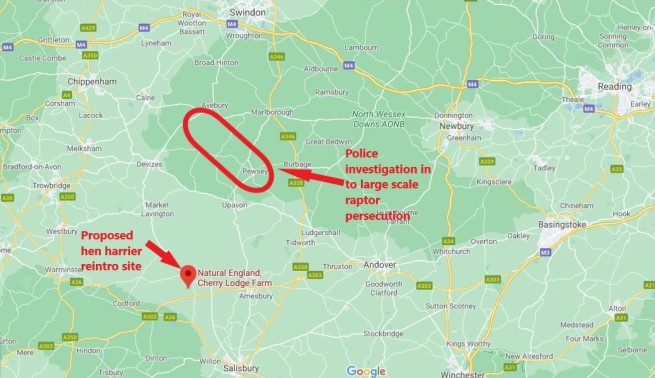