Further to yesterday’s blog (see here) about the proposed reintroduction of golden eagles to Wales and the two very different approaches being taken by two ‘competing’ organisations (see here), one of our blog readers attended last night’s public consultation event being hosted by Dr Paul O’Donoghue of Wilder Britain. 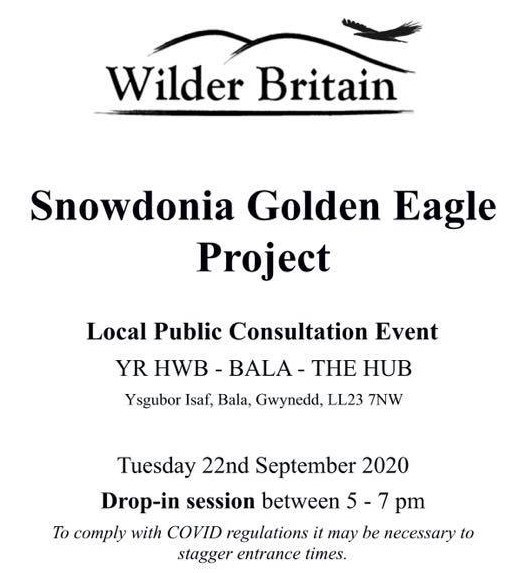 Many thanks to that blog reader who has provided us with a set of questions he asked and the short but extraordinary answers he says were provided by Paul O’Donoghue, as follows:

Question: On a scale of 1-10 how confident are you that this will take place next year?

Question: Why not follow IUCN guidelines and get birds from the nearest population?

Answer: Golden eagles in Scotland are not breeding enough to take any away, the numbers are in decline. IUCN guidelines say that you shouldn’t impede donor populations.

Question: Who are you working with in Norway? Have you entered in to dialogue with DEFRA for an import and export licence?

Answer: No dialogue with DEFRA yet. Vets lined up ready for disease risk assessment. We have a very good environmental lawyer working with us by the name of Susan Shaw.

Question: When did you last talk to Lorcan O’Toole? [Golden Eagle Trust, Ireland]

Question: Are you still confident in an 80% survival rate, when Ireland only works on around 30%?

Answer: Ireland’s success rate is a lot higher than 30%, I am confident at 80%, I wouldn’t be surprised if they all survived.

Question: Have you completed a Habitats Regulations Assessment?

Question: What assessment are you conducting in respect of ecological damage to protected species?

Question: Golden eagles are not a Schedule 9 species. What licence do you need?

Answer: Will only need a licence to hold the birds in aviary before release.

Question: Why just release ten birds? Any plans to top up? Is it just a test population?

Answer: We might apply to top up if we feel the need. It’s not a trial though.

Question: Why is Snowdonia an ideal habitat? Even better than Scotland?

Answer: Scotland is less productive and barren. There is much more diverse habitat in Snowdonia, forests, mountains, moorlands, lowlands etc.

Question: You said feasibility studies were complete. Aren’t these consultation supposed to be part of those studies?

Answer: We have completed the ecological studies, these consultations are part of the social/economic study.

Question: Why do RSPB, BTO and North Wales Wildlife Trust appear to be distancing themselves from you?

Answer: That is up to them, we have asked them to be involved. We don’t need them anyway.

Answer: White-tailed eagles are in conflict with farmers in Scotland and have much more impact on red listed species. If another organisation suggested white-tailed eagle we would strongly object.

Question: What is your estimated budget for this project?

Answer: That is something we are still working on.

Question: How much have you raised so far?

Answer: I can’t say but it is more than enough.

Question: Who are your main donors?

Answer: Not at liberty to say, they want to remain anonymous.

The answers Dr O’Donoghue is reported to have given about his fundraising activities are quite interesting. If he has already raised ‘more than enough’ funds for the project, presumably his ‘sponsor an eagle’ fundraiser on the Wild Britain website’s home page will be removed without further delay: 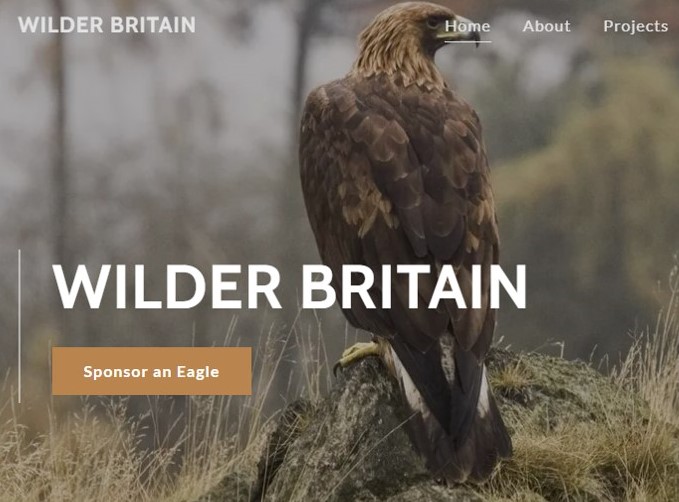 Although, if, as is reported, he’s ‘still working on’ what the project’s budget might be, how would he know whether he’d raised ‘more than enough’ funding already? It’s all very bizarre.

Our blog reader reported that ‘about twelve people’ attended last night’s public consultation, which doesn’t sound like very many. We’re told that one member of the audience pointed out the low attendance, possibly due to Covid, and suggested that O’Donoghue should consider putting on an online event so more people could attend. O’Donoghue is reported to have agreed with this suggestion and said he would look in to setting up a Zoom meeting.

We’re told that the audience included a few disgruntled farmers and some members of the public who were unhappy that the event wasn’t bi-lingual, with mutterings of ‘colonialism’. Somebody asked how many landowners had agreed to participate in the proposed reintroduction and the answer was ‘two on board at the moment’ but a conviction that more would soon join in and there’d be no shortage of potential release sites.

One member of the audience apparently called him a ‘crackpot’. O’Donoghue is said to have claimed there’d be no Great Bustards in the UK if it wasn’t for him.

A third public consultation event is due to take place in Caernarfon but the date has not yet been released. Hopefully the online event suggested by a participant at last night’s event will also take place.

Many thanks to the blog reader who provided the above information.

You have to feel for the other organisation that’s interested in restoring both eagle species to Wales. The Cardiff University-based Eagle Reintroduction Project Wales has, for the last three years, quietly undertaken scientifically-rigorous feasibility studies for the potential reintroduction of golden and white-tailed eagles to Wales. They’ve already published some of their findings in a peer-reviewed journal, with more to come, and they’ve been developing widespread partnerships, working towards putting forward a well-evidenced and widely endorsed case for a potential reintroduction if their scientific analyses support such a move.

If you’d like to help them please visit their crowdfunder (here), donate if you can or simply spread the word.