Further to last week’s news that Scottish Natural Heritage (SNH) has finally imposed a three-year General Licence restriction on the Leadhills Estate in South Lanarkshire (see here and here), there is now an explanation, of sorts, from SNH on the decision to issue the restriction notice.

It wasn’t just one alleged incident of illegal raptor persecution that triggered this sanction, but a series of them.

Well done to journalist Charlie Parker at The Times (Scotland) for getting the information. 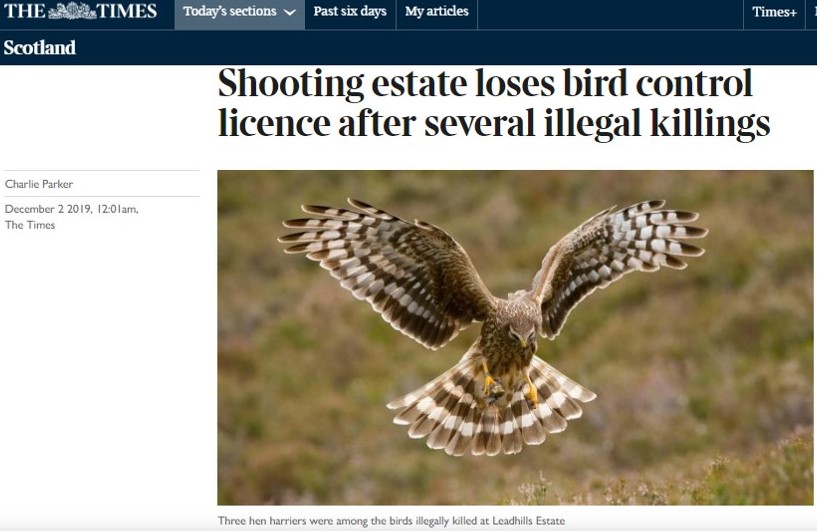 According to Charlie’s article, SNH’s decision was based on “clear evidence” of the ‘illegal killing of a short-eared owl, two buzzards and three hen harriers’ that were ‘shot or caught in traps’ on Leadhills Estate since 1 January 2014 (when SNH was given the power to impose a General Licence restriction on estates or individuals in Scotland). SNH has also claimed that ‘wild birds’ nests have also been disturbed’, although there is no further detail on this.

An unnamed SNH spokesperson is quoted in the article as follows:

“The police have investigated each of these cases and while it is very clear that offences have been committed, as is often the case with these types of crime it hasn’t been possible to gather the evidence to identify the person responsible.

There is also similar historic evidence of incidents on this property pre-dating the incidents, although SNH’s decision is based on incidents which occurred since January 1, 2014“.

Most of the incidents listed by SNH have been well publicised –

However, the alleged incident relating to a third hen harrier is less clear. SNH may be referring to the discovery in 2015 of a satellite-tagged hen harrier called Annie who had been shot, although her corpse was found on a neighbouring estate, not on Leadhills Estate. Or, perhaps there is another alleged incident relating to the shooting or trapping of a hen harrier on Leadhills Estate that has yet to be publicised? Time will tell.

There are two more quotes in The Times article that are worth a mention. First, one from Ian Thomson (Head of Investigations, RSPB Scotland) who said Leadhills Estate had a “long and appalling history” of confirmed raptor persecution incidents and,

“While this sanction is positive news, it is becoming increasingly clear that the threat of such a penalty is no deterrent to those whose sole motivation is the maximising of grouse numbers. Until sporting estates face the potential removal of the right to shoot, we do not believe there is a sufficient deterrent to those who continue to slaughter our birds of prey.”

Meanwhile, an unnamed spokesperson for Leadhills Estate is quoted as follows:

“The decision to restrict the general licence does make clear it is not inferring any criminal activity on the part of the estate. The estate condemns all forms of wildlife crime and all employees and agents of the estate are in no doubt as to their responsibilities“.

It’s our understanding that the General Licence restriction ‘does not infer any responsibility for the commission of crimes on any individuals‘ This is the exact wording from SNH’s restriction notice (see here). This statement is not the same as the one being claimed by Leadhills Estate, which argues that the restriction ‘is not inferring any criminal activity on the part of the estate’.

This sounds like real twilight zone material. SNH is holding the estate to account by imposing a sanction for alleged wildlife crimes because there is insufficient evidence to attribute the activity to an individual estate employee and the estate is saying that SNH’s decision to impose the sanction doesn’t infer any responsibility on the estate. Er….

More to come on the Leadhills Estate case soon…