The three-day-long British Birdfair takes place annually at Rutland Water in August and attracts thousands of visitors from around the world. Every year, Chris Packham is given a prime time Saturday morning slot in the huge Events marquee, to talk about whatever he likes.

This year, Chris used his slot to highlight the ongoing work to tackle the illegal killing of birds in Malta, Cyprus and the UK – work he personally has been involved with for a number of years – and he generously invited a number of us (film maker Ruth Peacey from LUSH, Mark Sultana from BirdLife Malta, Andrea Rutigliano from the Committee Against Bird Slaughter (CABS), and Ruth Tingay from Raptor Persecution UK), to help explain the situation to his audience. Mark Avery made a cameo appearance at the end.

The marquee was rammed, with an estimated 1,000 people inside and a hoard of people outside who couldn’t get in but apparently sat with their ears pressed up against the canvas trying to hear. We’re told this was unprecedented at any previous Birdfair and is undoubtedly testament to Chris’s popularity but perhaps also reflects a growing public awareness and interest in illegal bird persecution.

The standing ovation at the end of this presentation was incredibly moving for those of us on the stage. It seemed to go on forever and will stay with us all for a very long time. On behalf of all the presenters, thank you, we appreciated it. Here’s what it looked like to us (photo by Mark Avery). 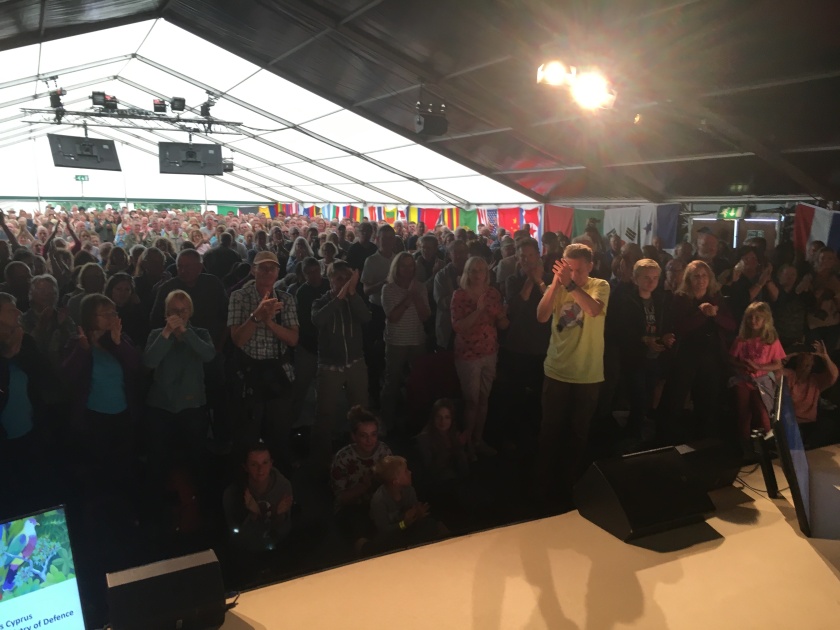 Incidentally, Ruth Peacey has a well-deserved nomination for Conservation Hero of the Year in this year’s Birders’ Choice Awards, hosted by Birdwatch magazine. Please vote for her here.