Earlier this year, the Bowland Brewery in Lancashire committed to donate a proportion of the proceeds from the sale of its Hen Harrier beer to the RSPB’s hen harrier conservation projects (see press statement here).

The very real prospect that this beautiful bird of prey may disappear from the skies above the Forest of Bowland is unthinkable. That’s why we are committing to donate a significant sum of money each year to safeguard the future of one of Bowland’s most iconic residents.

As the harriers return to the Bowland Fells to nest this spring, we hope to see nature-lovers visiting the area to marvel at their amazing skydance and celebrate with a pint of the beer these rare and precious birds inspired.

By buying Hen Harrier by the pint or in bottles, locals and visitors alike will be making a positive contribution to hen harrier conservation in Bowland – and ultimately helping the population to grow.” 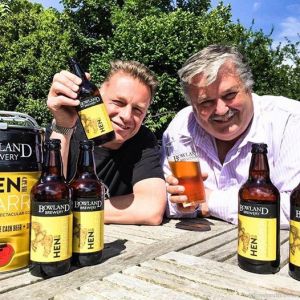 Bowland Brewery’s facebook page was targeted with a torrent of fake reviews, resulting in a drop in their overall review rating. Comments posted on facebook by the grouse-shooting trolls included:

“Get this off tomorrow or we will hound you”.

“They drink with the devil. Destroy the business!”

“Side with Packham and the knife comes out”

“They thought going with Packham was good. Now they must feel the pain”

“Shut them down. Anti shooting”.

“You can run but not hide. Hammer em!”

“Shut down the business. Shut down, boycott, whatever. Get Bowland Brewery outed”.

“Get hold of the boss and tell him to mend his ways. Otherwise we will crush em”.

Nice guys, eh? Wonder how many of them making threats have a shotgun/firearms certificate? There are some known gamekeepers involved in this hate campaign, including the Head Gamekeeper of Millden Estate in the Angus Glens, Bert Burnett from the Scottish Gamekeepers’ Association (who wrote “Well done everyone”) and some of the comments have been ‘liked’ by the official facebook page of the National Gamekeepers’ Organisation.

All slightly ironic from an industry that has recently accused Chris Packham of ‘celebrity bullying’ (see here) just because he’s politely asking Marks and Spencer to be transparent about their claims that their red grouse are produced ethically and sustainably (see here).

It’s also ironic that this hate campaign against the brewery comes from an industry that purports to be interested in protecting rural jobs. The Bowland Brewery is a small business, employing local people, in a rural community.

If you want to show your support for the Bowland Brewery and their ethical and charitable support of hen harrier conservation, please consider buying their beer. It’s available in various local outlets (see here) and can also be bought online (see here).

If you want to support the campaign to ban driven grouse shooting, because it’s the only way hen harriers will be allowed to thrive in the English uplands, then please join 65,000 others and sign THIS PETITION.