There was an interesting opinion piece in The Herald on 12th August, written by Mark Smith who was scathing both about grouse shooters (‘that rare and rather sad creature’) and the Scottish Government’s ‘lack of urgency’ in its failure to respond to the Werritty Review. It’s well worth a read (here).

John Mason (SNP), Alison Johnstone (Greens) and Alex Rowley (Labour) all pushed Environment Minister Mairi Gougeon and made it clear that patience has run out: 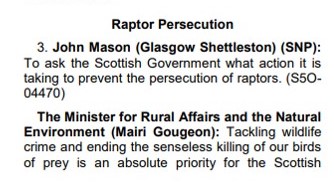 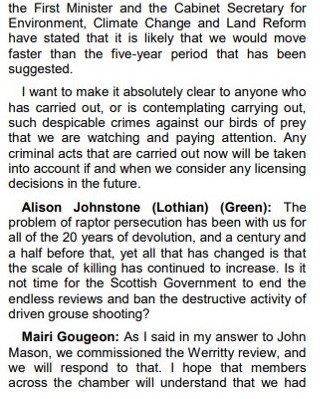 There’s absolutely no doubt the pressure is mounting to unprecedented levels.

One of these MSPs has taken the matter a step further. More on that in the next blog….

Meanwhile, if you want to add to that mounting pressure, and if you’re sick to the back teeth of illegal raptor persecution on driven grouse moors, please consider participating in this quick and easy e-action to send a letter to your local Parliamentary representative (MSP/MP/MS) urging action. Launched last Saturday by Wild Justice, RSPB and Hen Harrier Action, over 41,000 people have signed up so far.

This means that over 41,000 pre-written letters complaining about illegal raptor persecution and the environmental damage caused by intensive grouse moor management, are winging their way to politicians of all parties across the country. If you want your local politician to receive one, Please join in HERE