As many will recall, in November 2019 SNH imposed a three-year General Licence restriction on the Leadhills Estate in South Lanarkshire following ‘clear evidence from Police Scotland that wildlife crimes had been committed on this estate’ (see here, here, here, here, and here).

Those alleged offences included the ‘illegal killing of a short-eared owl, two buzzards and three hen harriers’ that were ‘shot or caught in traps’ on Leadhills Estate since 1 January 2014 (when SNH was first given powers to impose a General Licence restriction). SNH had also claimed that ‘wild birds’ nests had also been disturbed’, although there was no further detail on this. The estate has consistently denied responsibility, obviously.

[This male hen harrier was found with its leg almost severed, caught in an illegally-set trap next to its nest on Leadhills Estate in 2019. Despite valiant efforts by a top wildlife surgeon, the bird didn’t survive. Photo by Ruth Tingay] 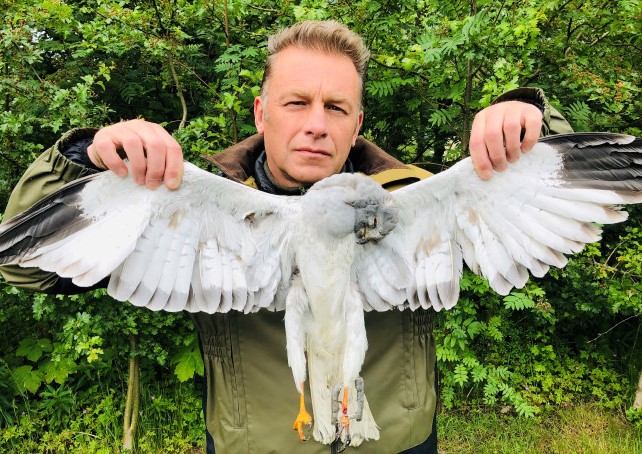 This ridiculous situation is a legal quirk, outlined in a Judicial Review, and isn’t SNH’s fault (although SNH could be doing a lot more to point out the system failings to the Scottish Government). Basically if a penalised estate isn’t provided with an opportunity to apply for an individual licence the estate could argue the system was unfair and the legality of the General Licence restriction probably wouldn’t stand. If further wildlife crimes are discovered on the estate when an individual licence is in place, SNH can revoke the individual licence but the estate can simply reapply for another one. We’ve discussed how the General Licence restriction is a wholly ineffective deterrent plenty of times in the past, (e.g. see here, here, here, here) and last year we even gave evidence to this effect alongside RSPB Scotland and others to a Scottish parliamentary committee (here).

Since the General Licence restriction was imposed on Leadhills Estate in Nov 2019 we’ve been interested to find out whether the estate has applied for, and been granted, an individual licence.

An FoI request has revealed that yes, SNH issued an individual licence that was valid between 27 April – 1 June 2020 but this was far more restrictive than the individual licences (e.g. see licence details here) that were issued to Raeshaw Estate when a GL restriction was imposed on that estate in 2015.

The individual licence at Leadhills Estate only permits the shooting of two species – hooded crow and carrion crow, in a limited part of the estate and apparently to protect lambs. 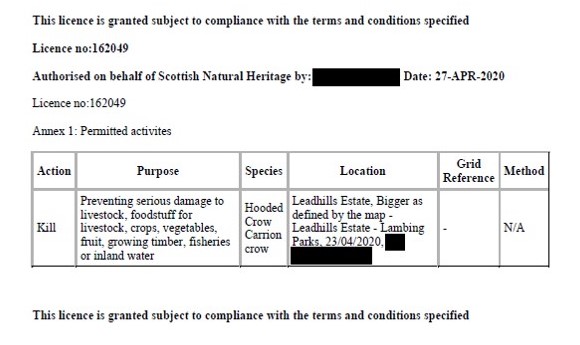 According to condition #8 of this licence, the licensee has to submit a written report to SNH within one month of the licence expiring (so by 1 July 2020) detailing the scaring methods deployed and the number of birds shot. We have submitted an FoI request for this information.

We’ve also asked SNH for details of the compliance checks made for the duration of this licence. SNH has said in the past that compliance checks would form part of the ‘tighter scrutiny’ involved with an individual licence. Let’s see. Presumably this type of environmental monitoring/legal compliance check would have been one of the Government-sanctioned jobs during lockdown.