An innovative new type of satellite tag has been designed to provide a boost to understanding raptor movements and behaviour, as well as help understand the fate of birds which die in the Cairngorms National Park and more widely across Scotland.

Over the next 18 months some young Golden Eagles in and around the Cairngorms National Park will be fitted with a novel ‘Raptor Tracker’ tag, as part of a trial which will provide key information on movements and behaviour, such as whether a bird is feeding or resting. Most importantly, it will provide an instant fix on any birds which die.

Tags in current use are limited in what information they can provide on the exact location of any bird which dies.  This new tag uses the ‘geostationary Iridium’ satellite network and ensures that signal information is always available. Crucially, it has been developed with multiple sensors; these immediately send a ‘distress’ signal, with an exact location, back to base if unusual behaviour is detected. This early warning system has the added benefit of helping to rapidly identify and recover birds which have died.

[An illegally killed satellite-tagged golden eagle, believed to have been trapped on a grouse moor in the Angus Glens resulting in its legs almost being severed, and then dumped in a layby several km away, inside the Cairngorms National Park, where it was left to die an horrific death. Photo by RSPB] 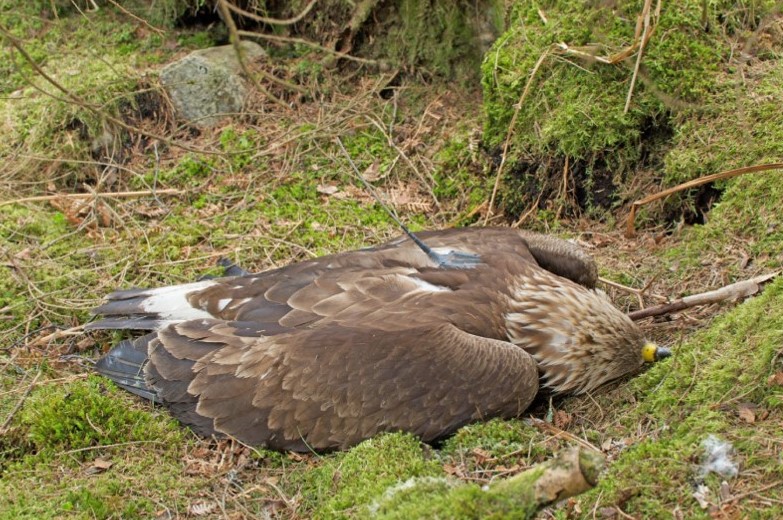 Environment Secretary Roseanna Cunningham said: “This is great news for improving our understanding of eagle behaviours, and in the fight against wildlife crime. The tags should make a real difference in deterring would-be criminals, as well as playing a key role in establishing exactly what happened, should any of these magnificent birds of prey disappear or die in unusual circumstances.”

Robbie Kernahan, Head of Wildlife Management, of Scottish Natural Heritage (SNH) added: “This exciting new technology will give us new information on the movements of these iconic birds. This should also be a significant deterrent to anyone thinking of persecuting raptors, as we will have detailed information on birds’ movements in the minutes leading up to their death.”

Charlie Everitt, UK National Wildlife Crime Unit commented: “This new tag is a significant step forward in using technology to research further the intriguing ranging behaviour of Golden eagles. However, the implications for preventing wildlife crime and as an aid to enforcement are also very apparent. I look forward to the trial and working closely with colleagues in CNPA and SNH.“

Phil Atkinson, Head of International Research, BTO said: “BTO has been developing new tagging technologies for several years, working to increase the quality and type of information collected. These new ‘Raptor Tracker’ tags have the potential to reveal new aspects of Golden Eagle behaviour, providing fascinating insights into their lives. We are looking forward to the trial and what it reveals.”

The CNPA and SNH have been working on this for over two years, and for the last six months the British Trust for Ornithology has been involved in developing the new tag. The tags will be placed on birds over the next 18 months to trial them. Changes can be made to the tags remotely to ensure that they are working optimally.

If the trial proves successful, the organisations will look at putting these on more Golden Eagles and also the potential miniaturisation of the technology to allow similar tagging of Hen Harriers and other species.

Some of what has been written in this press release is absolute nonsense, in terms of the limitations of some of the highly sophisticated satellite tags currently deployed on golden eagles. However, to focus on that would detract from the bigger picture of what is being proposed, and that’s far more important to discuss.

The development of a tag that can potentially send what amounts to a distress signal from the exact location and at the exact time the tagged eagle is being illegally killed is to be warmly welcomed. If this tag works as the manufacturers claim it will, it will provide wildlife crime investigators with high quality evidence of the precise location of the crime, which currently can only be inferred from tag data depending on the tag’s ‘duty cycle’, which determines when it’s programmed to transmit data to the tag operator (this can vary between a matter of hours and a number of days, depending on tag type). That would be a seriously good development.

What it wouldn’t do is to identify the individual criminal, especially if the crime took place on a large grouse moor estate where multiple gamekeepers are employed (which is where most of the golden eagle killing in Scotland has taken place). In those situations, the wildlife crime investigation wouldn’t get any further than the current situation we see playing out so often today –  that is, the body and the tag removed from the scene and destroyed, “no comment” interviews from all suspects and no way for the police to identify the actual individual responsible. Without that identification, a prosecution cannot proceed.

That’s not to say that the estate would get off scot free though, as they currently do. Conservationists have been arguing that the pattern of evidence from the current raptor satellite tags that suddenly and inexplicably ‘disappear’ should be sufficient evidence for SNH to impose General Licence restrictions on the offending estates. For some reason (unexplained, as far as we can tell), this has not been happening, even though the Environment Cabinet Secretary acknowledges the significance of the data pattern (see her editorial in the Government’s annual wildlife crime report). However, if this new tag can do what is claimed it can do, there’s no question that that information should be accepted by SNH and sanctions should be applied to the estate involved.

It’s great that this tag will be trialled in and around the Cairngorms National Park, given that some of the more intensively-managed grouse moors in and at the edge of the Park are well-known golden eagle-killing hotspots, as shown in this map derived from data provided in the golden eagle satellite tag review in 2017. It’s interesting that none of the people quoted in the press release mentioned this fact! 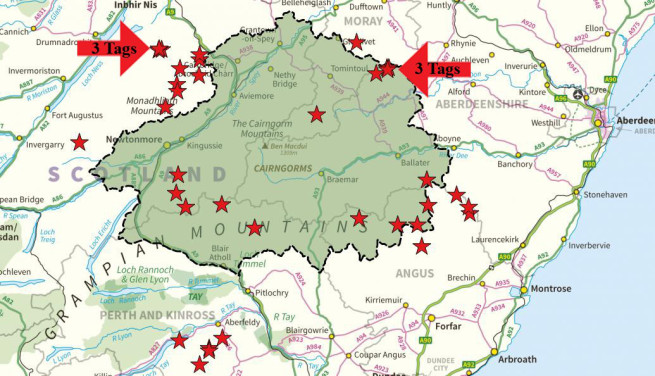 It is though, very pleasing indeed to see such senior figureheads recognise that the deployment of satellite tags on threatened raptor species is an acceptable and important conservation tool and a helpful investigative tool for detecting wildlife crime. It seems the concerted campaign by several meat heads in the gamekeeping world, which has included disgraceful personal attacks and smears on the integrity of those who fit satellite tags, has fallen on deaf ears.

We look forward to hearing about the field trials on this new tag in due course. Well done to all involved.