One of the six action points in DEFRA’s Hen Harrier Inaction Plan is to ‘reintroduce’ hen harriers to southern England: 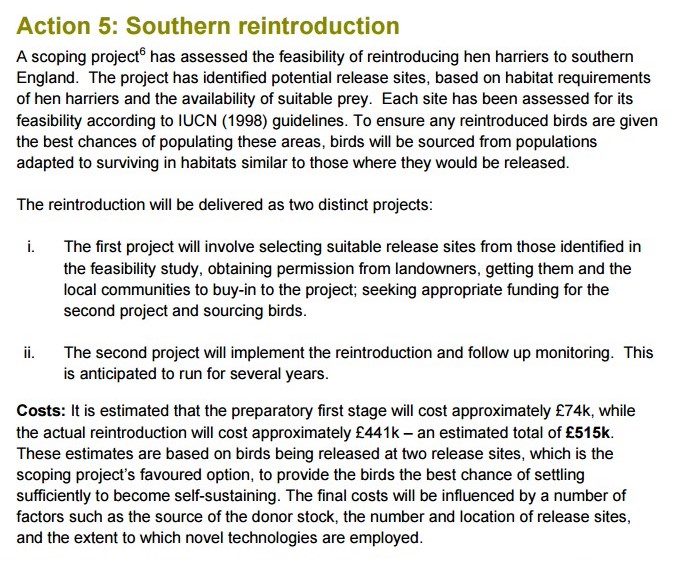 DEFRA’s HH Inaction Plan has been widely criticised by conservationists, with the main focus being on the brood meddling part. The proposed southern ‘reintroduction’ hasn’t received much attention, largely because the scoping project on which it is based is still unpublished – it’s hard to scrutinise something that’s being kept secret.

There had been concerns that chicks removed from the northern uplands as part of the brood meddling scheme would be used as the source birds for the southern ‘reintroduction’. This would have been unacceptable on a number of fronts, not least because it would be in breach of IUCN guidelines – you can’t source birds from a donor population if their removal would negatively affect the donor population. However, our recent FoI to Natural England has shown that those brood-meddled birds will be released back to the northern uplands, and not in to southern England (see here).

We’re now in a position to shed a bit more light on the proposed southern ‘reintroduction’ (it’s not actually a reintroduction because hen harriers are not extinct in southern England). Revealed through another FoI, the following update was provided by Adrian Jowitt (Natural England) to Paul Ballinger (DEFRA) on 23 September 2016:

‘Southern reintroduction: the main work undertaken over the last few months has been setting up and starting early conversations with stakeholders in the areas proposed. We have had discussions with landowners on Exmoor and in early October are going to meet with some key farmers and landowners in southern Wiltshire. The discussions have in the main been cautiously positive although there is still a way to go. We have also been exploring different funding routes and are starting to explore possible sources for chicks. We will also be considering whether we need to do any further habitat suitability checks beyond what was done for the original feasibility study and to that end will be carrying out some basic field visits with our hen harrier ecologist‘.

So, it looks like Exmoor may be a potential ‘reintroduction’ site, as well as somewhere in southern Wiltshire. That’s interesting.

There has been at least one hen harrier breeding attempt in Wiltshire since 2002, although we don’t know the outcome. Here’s an image from a recent talk given by Natural England’s Stephen Murphy showing hen harrier breeding records between 2002-2015 (apologies for the poor quality photo – a reflection on us, not on the quality of Stephen’s slides): 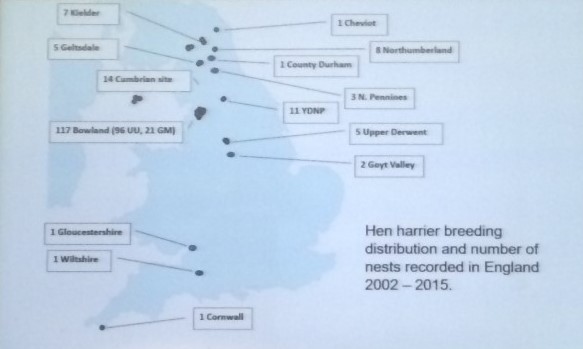 Wintering hen harriers are seen around Exmoor, albeit relatively infrequently – indeed, a satellite-tagged hen harrier from Bowland (2014 – ‘Burt’) is known to have visited Exmoor, because that’s where his last sat tag transmission came from, although in Burt’s case his ‘disappearance’ was thought to be as a result of a genuine tag failure rather than anything more sinister.

Exmoor, including Exmoor National Park, is well known for game shooting. This report from 2004 demonstrates just how much driven game shooting takes place there (predominantly pheasant & partridge) and how many gamekeepers work there. Perhaps that’s why Natural England’s discussions with landowners are described as being only ‘cautiously positive although there is still a way to go‘. If this ‘reintroduction’ is to go ahead, as Natural England appears to expect, these landowners MUST be on-side before any birds are released. It’ll be interesting to see how things develop on that score.

There are still huge question marks about this proposed ‘reintroduction’. Many of us are not entirely supportive because we believe the grouse shooting lobby and Natural England/DEFRA are using it as a way of diverting attention from the ongoing criminal persecution of hen harriers in the northern uplands. Releasing some birds in to southern England (assuming a source population can be found) will not stop the grouse moor managers from killing hen harriers in the northern uplands, the fundamental cause of this species’ decline in the first place.

You could argue that, theoretically at least, the southern England ‘reintroduction’, if successful, would increase the range and conservation status of English hen harriers, and it would also bolster the English population, increasing its resilience from population decline. That’s true. However, it’s also true that if hen harriers were not still being routinely killed in the north, their breeding range would increase naturally, their conservation status would improve, and the population’s resilience to decline would increase.

You could also argue that the estimated half-a-million quid (and the rest!) of taxpayers’ money that’ll be spent on this attention-diverting scheme would be better spent on improving enforcement measures so the hen harrier killers can finally be brought to justice.

34 thoughts on “Hen harrier ‘reintroduction’ to southern England: an update”