Further to the news about the mass poisoning of raptors uncovered on the Glanusk Estate in the Brecon Beacons National Park, Wales (see here), we wanted to find out whether the Estate had incurred a financial penalty for what appears to be a clear breach of cross compliance rules.

In order to qualify for Common Agricultural Policy (CAP) subsidy payments, claimants are required to keep their land in ‘Good Agricultural and Environmental Condition’ and comply with a set of Statutory Management Requirements (SMRs). This is known as cross compliance. [NB: the rules have now changed slightly but as this mass poisoning took place in 2012/2013, the old rules apply].

In our opinion, the illegal poisoning of raptors with Bendiocarb is a breach of SMR1 (relating to the protection of wild birds) and SMR9 (relating to restrictions on the use of plant protection products). 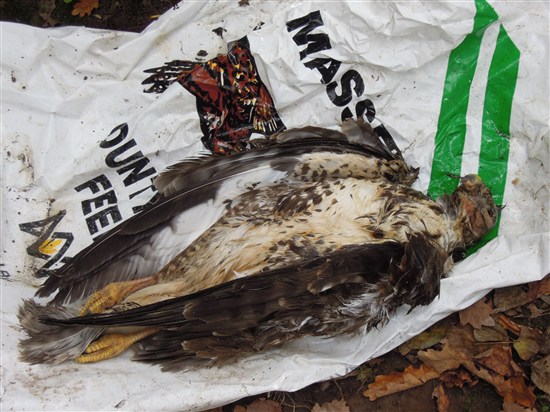 In April, an FoI was submitted to Rural Payments Wales (RPW), the Government agency responsible for implementing CAP subsidy payments and for imposing penalties if cross compliance regulations have been breached. Here are the questions that were asked, along with the answers received from RPW:

Question 1. Which of these incidents were on land in receipt of subsidies under the Single Payment Scheme (SPS) during the years 2012 and 2013?

[RPUK comment: Although there were 24 incidents in total, it seems that RPW has excluded 14 of them, presumably because the illegally-poisoned birds and/or illegally-placed poisoned baits were on land that is not subject to SPS, for example, in woodland].

Question 2. What were the amounts of payments made under SPS in 2012 and 2013 and to how many beneficiaries?

[RPUK comment: We’ve scrutinised the CAP payments website to find out who these beneficiaries were and we’ve worked out that they are two tenant farmers on the Glanusk Estate, presumably on whose landholdings the poisoned birds/baits were discovered].

Question 3. Can Rural Payments Wales confirm whether these offences would have breached SMR1 and SMR9 of the SPS?

Answer: These offences would be a breach of SMR1 and SMR9 if they were found to be attributable to a benficiary of Common Agricultural Policy (CAP) funds.

Question 4. What investigation or enforcement action has Rural Payments Wales undertaken in relation to these offences?

Answer: RPW considered the offences in question and concluded there was insufficient evidence to apply a cross compliance breach to a beneficiary.

Question 5. What subsidy withdrawals have been made from anyone in receipt of money under the SPS in 2012 and 2013 as a result of these incidents?

Answer: No withdrawal of subsidy has been made from anyone under SPS 2012 and SPS 2013 as a result of these incidents.

A further FoI was submitted to RPW in May 2016, to try and understand why RPW thought there was ‘insufficient evidence’ to apply a penalty. Here are the questions that were asked, along with the answers received from RPW:

Question 6. Please can you tell me the date (day/month/year) that RPW first became aware of these poisoning incidents?

Question 7. Please could you provide information about the extent and type of enquiries RPW conducted when “considering the offences in question and concluding there was insufficient evidence to proceed with a cross compliance action”?

Answer: A formal police investigation was underway in this case and RPW undertook a review of the documentary evidence.

Question 8. Have the two claimaints been informed by RPW of the SMR1 and SMR9 breaches on their land?

Answer: No, RPW has not established any breaches to SMR1 and SMR9 on their land.

Question 9. Have the two claimants been interviewed by RPW about the incidents on their land?

Question 10. Can copies of any correspondence between RPW and the claimants about these incidents be supplied (with personal details redacted)?

Answer: RPW has had no contact with the claimants over these incidents.

Question 11. What steps has RPW taken to prevent a reoccurence of these breaches?

Answer: RPW undertakes a programme of annual on site visits to farm businesses to ensure cross compliance requirements are respected.

To be honest, we’re completed baffled by RPW’s answers to questions 8-11. They’re either displaying overwhelming apathy, or they’re confused, or we’re confused. Confusion and apathy shouldn’t be unexpected – we saw a similar approach from the Rural Payments Agency (operating in England) when we challenged them about a subsidy withdrawal for the Stody Estate (Norfolk) after the discovery of mass raptor poisoning on their land. The confusion and apathy continued for a year, but, to their credit, the RPA did eventually get it right and imposed a large financial penalty on Stody Estate (see previous blogs here).

Are we going to have to go through the same process with Rural Payments Wales?

Was there a cross compliance breach or wasn’t there? If there was, why hasn’t a penalty been imposed? Why hasn’t RPW bothered to discuss these poisonings with the subsidy recipients? How can RPW claim, with straight faces, that their on site visits “ensure cross compliance requirements are respected”? If that’s the case, where was RPW in 2012 and 2013?

There’s something decidedly rotten about this whole affair. The most significant wildlife poisoning incident ever uncovered in Wales, and the second largest in the UK in 40 years, on a prominent estate with strong royal connections, inside a National Park. Abject secrecy about these crimes from Dyfed Powys Police (until we started asking questions 3 years later), no criminal prosecution, and no subsidy penalty.