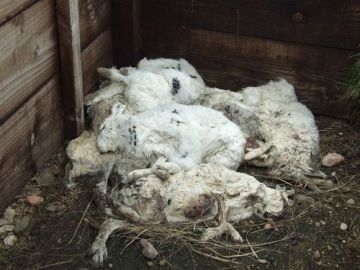 A leading ecologist has accused Scottish landowners of causing “massive declines” of mountain hares on grouse moors around Deeside, Aberdeenshire.

In an excellent article published in The Herald today (and on journalist Rob Edwards’ website, see here), Dr Adam Watson claims that what is going on is a ‘national scandal’ and accuses SNH of failing in their duty to protect this important keystone species.

To counter this argument, Tim Baynes of Scottish Land and Estates claims that even though thousands of hares are destroyed each year, this was ‘less than 10% of the population’.

That’s an interesting argument, especially given the uncertainty of the actual population size of this species. The most up-to-date UK population estimate appears to have been made in a 1995 publication (Harris et al 1995). The estimate given then was in the region of 350,000 individuals, with 99% of these living in Scotland. However, the authors recognised that this figure may be either overestimated or underestimated by a whopping 50%!

It would appear that Baynes is basing his (flawed) ‘no-impact’ argument on an SNH-commissioned study that showed at least 25,000 mountain hares were culled on Scottish estates during 2006/2007. That study demonstrated no impact on the hare’s distribution (at that time) but was not able to determine whether there was an impact on the hare’s abundance (which is the key point when estimating population size!) because no reliable measures of estimating abundance for this species were available.

What Baynes also failed to mention was that the 25,000 culled only related to information provided by 90 estates; a further 102 estates (68 driven grouse estates and 34 walked-up grouse estates) did not provide any information to the survey, so the actual figure culled was likely to be considerably higher.

It’s also ludicrous for Baynes to be referring to a (fairly dodgy) population estimate from 1995 – that was 18 years ago! The latest information, just published by the BTO, suggests a 43% decline in mountain hares between 1995-2012 (see here).

Talking of ludicrous, Alex Hogg of the Scottish Gamekeepers’ Association is also quoted in The Herald article, claiming that gamekeepers have ‘no alternative but to suppress the numbers of mountain hares on grouse moors because of the dangers of Louping Ill Virus, which can infect humans’. However, here is an article that suggests humans are “rarely” affected by the Louping Ill Virus! And here is an article about a scientific publication that suggests there is “no compelling evidence base” that culling mountain hares can stop the spread of Louping Ill Virus!

A tick-borne disease that seems to be of more concern to humans is Lyme Disease. And what spreads Lyme Disease? Pheasants, amongst other species (see here). Given Mr Hogg’s concern for human health, can we expect to see him advocating a moratorium on the release of 43 million pheasants, per year, into our countryside?

The crux of The Herald article is that SNH is failing in its statutory duty to protect the mountain hare. This is a European-protected species and thus SNH has a duty to ensure the species’ conservation status is maintained and that their populations are managed sustainably. Given previous concerns about the species’ conservation status, the Scottish Government recently introduced a closed season for mountain hares as part of the WANE Act (see here), although it’s hard to judge just how effective that will be given the lack of monitoring and enforcement.

To be fair to SNH, they have previously tried to establish an effective monitoring programme for the mountain hare. They commissioned several reports on the subject between 2005-2010 but these reports all recommended a clear need to develop ‘reliable, robust and easily implemented survey methods’. As far as we can tell, nearly four years later they still haven’t done so and according to Dr Watson’s findings of “massive declines” of mountain hares in Deeside, in addition to the BTO’s findings of a 43% decline between 1995-2012, it would appear that SNH need to prioritise their monitoring scheme with some urgency. Asking moorland managers to ‘talk to us if they are thinking of culling hares in large numbers’ (see SNH quote in The Herald) is not going to stand up as evidence when SNH are finally taken to court for breaching European conservation laws.

The photograph shows a pile of mountain hare carcasses on Deeside in 2010 (from Rob Edward’s website).