Earlier this month the RSPB published a blog (here) detailing an incident that was witnessed by a Natural England fieldworker at a hen harrier nest site in Whernside, Cumbria during this year’s breeding season and Natural England’s subsequent refusal to publicise the details.

The alleged incident involved an armed man sitting near a tethered eagle owl that had been placed within the territory of a pair of breeding hen harriers in an area where controversial brood meddling was taking place.

Here’s what the RSPB wrote about the incident:

‘…..a Natural England fieldworker was monitoring a hen harrier nest on moorland near Whernside, Cumbria, when he saw a man wearing camouflage carrying a firearm and a live bird of prey, believed to be an eagle owl about 300m from the hen harrier nesting area. He tethered the bird and sat a short distance away with his gun. In the circumstances there seems little doubt the intention was to draw in raptors, presumably the hen harriers, to shoot them. The use of a tethered live bird as a decoy to kill or take a wild bird is in itself illegal, but a method that seems to be increasingly used for targeting raptors. This was no doubt a highly stressful situation, we understand the fieldworker took some video footage and made himself visible. This eventually had the desired effect, and the suspect, realising he was under observation, left. It was reported to the police but due to evidential issues around establishing the identity of the suspect, it was not possible to take the matter forward to court. The RSPB would like to place on record our thanks to Cumbria Constabulary and the CPS for their determined efforts to progress this investigation. We firmly consider that this incident and the video should now be put in the public domain’.

A few days later we published a blog about an allegation we’d heard from a number of sources, that the police investigation couldn’t progress because a Natural England staff member had contravened the Police & Criminal Evidence Act by phoning up the alleged gunman and asking whether he’d been present at the alleged crime scene (see here).

The Natural England blog (here) is well worth a read and when you’ve done that, have a look at Mark Avery’s dissection of it (here) in which Natural England’s contortions are laid bare.

The one part of the NE blog that Mark didn’t address was this bit, which looks like a response to the allegations made on RPUK that Natural England had cocked up the police investigation at that hen harrier site at Whernside: 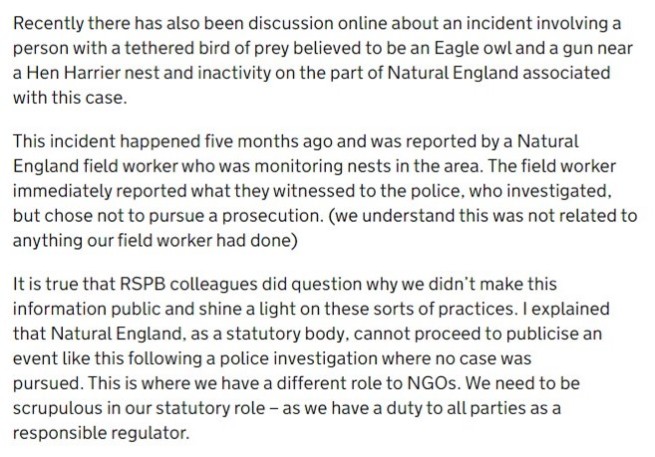 The statement of interest here is the middle paragraph. Natural England reckons the failed police investigation ‘was not related to anything our field worker had done‘ but NE carefully avoided mentioning the allegation that an NE staff member had phoned up the suspect and had thus compromised the police investigation by breaching the requirements of the Police and Criminal Evidence Act.

It would also be useful if the Crown Prosecution Service (CPS) and/or Cumbria Police released the legal advice that was given by the CPS to Cumbria Police on this particular case.

It would also be helpful if Natural England would publish the video evidence of an armed man, sitting with a tethered eagle owl, in the territory of a pair of breeding hen harriers at one of this year’s brood meddling locations. It’s not like there’s anything to hide, is there?

In related news, if you want further evidence of Natural England’s absolute ineptitude when it comes to the conservation of birds, have a read of this (here), published today by Mark Avery. It’s shocking.