You couldn’t make this stuff up.

On 25th March 2020, the landowners’ lobby group, Scottish Land & Estates (SLE) urged its members to use voluntary restraint and stop setting fire to grouse moors, to ensure ‘there was no chance for additional strain on public services’ (i.e. the fire and rescue service, if a so-called ‘controlled’ burn became, er, uncontrolled) (see here).

This call to halt muirburning was welcomed by many, not just with respect for the emergency services during a national crisis but for many, many environmental and conservation reasons too, not least the climate emergency. And whoever thinks that it’s a sensible idea, under the guise of so-called ‘conservation’, to set the moors alight at the onset of the bird breeding season (i.e. throughout April), even though the Muirburn Code permits it, is frankly deranged.

[Burning up a grouse moor, photo by Ruth Tingay] 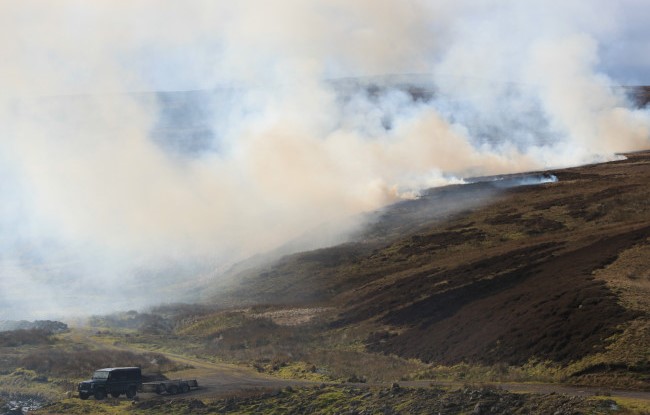 However, the grouse shooting industry isn’t celebrated for its sensible ideas nor its willingness to self-regulate nor its participation in voluntary restraint, so it came as no surprise to see, five days later, evidence of selfish defiance of SLE’s call for restraint as smoke rose from grouse moors from the Borders to Morayshire (see here).

This led to Andy Wightman MSP proposing an amendment to The Coronavirus (Scotland) Bill (Emergency Bill) calling for an immediate (but temporary) ban on all muirburn across Scotland (see here).

On 1st April Andy’s amendment received widespread cross-party support (apart from the Conservatives) and was passed (see here and here).

As of today (7 April), the emergency legislation is enacted and all muirburn is now illegal in Scotland (see here).

So how has Scottish Land & Estates reacted to the news that its call for a voluntary, temporary halt was ignored but has now been shored up by being written in to statute, thanks to Andy Wightman’s quick thinking? If you look at the SLE website you’ll not find any comment or statement about it, just silence. SLE probably took one look at BASC’s embarrassing public reaction (here) and thought better of exposing itself as being equally absurd.

But equally as absurd is exactly what SLE is. The day after Andy’s amendment was approved by the Scottish Parliament, but away from the public eye, SLE’s Chief Executive Sarah-Jane Laing sent a briefing email to SLE members to provide an ‘urgent update on emergency legislation’.

Here’s what she told members about the new muirburn ban:

So despite SLE calling for a halt to muirburn, and despite clear evidence that this call was being ignored by some grouse moor owners, SLE is now howling that the resulting enforced temporary ban, which in effect lasts for just four weeks and is what SLE wanted anyway, is ‘disproportionate and unnecessary’!

Does anyone still think the grouse shooting industry has the public interest at its core?

17 thoughts on “Landowners’ lobby group who called for muirburn moratorium now complains about the ban!”