Firefighters from across West Yorkshire have been tackling a significant moorland blaze at Deer Hill Reservoir in Marsden today after an emergency call came in just before 12.30pm.

The incident has required 20 fire appliances from across West Yorkshire to attend with firefighters tackling a mile long fire-front.

It’s believed the fire started as a result of controlled burning which spread.

The Fire Service is now strongly urging landowners to cease controlled burning and for anyone using the moors to be extra vigilant not to start a fire accidentally. 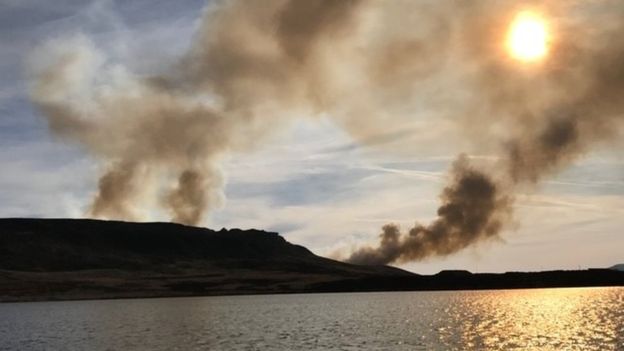 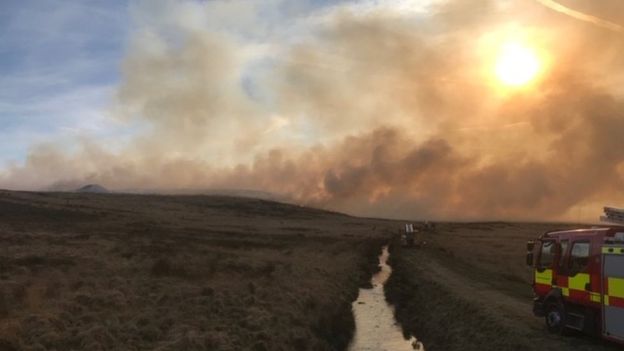 Last year the Fire Service and partners launched the Be Moor Aware campaign and Bradford, Calderdale and Kirklees councils brought in Public Space Protection Orders banning barbecues on moorland and other open spaces.

Assistant Chief Fire Officer Nick Smith said: “We are disappointed to see what has happened today which could have so easily been avoided and we urge landowners to stop controlled burning with immediate effect. Controlled burning can easily spread and tackling the consequences takes up a huge amount of the Fire Service’s time and resources – moorland fires can quite literally go on for miles and days.

We are currently trying to focus our resources on supporting the national effort to respond to Coronavirus and this is unhelpful to us. We will be making every effort to contact landowners over the forthcoming days and to reiterate this message. These are unprecedented times and we require our resources to support communities and help the vulnerable rather than having firefighters tied up for days on the moors undertaking this kind of arduous work. It is not where we want to be focusing our energies at this time, which we are sure people will understand.

Members of the public who are going onto the moorland for some fresh air and a walk should also be extra vigilant not to start a fire accidentally. Alongside partners, we started a public awareness campaign last year, called Be Moor Aware, following widespread moorland fires across the region and all of our advice from that campaign still stands.

We trust that you will take this advice seriously not only to protect the moorland, but also to help protect your communities at this difficult time.”

Of course, grouse moor burning is continuing apace across the UK uplands. Apart from the obvious and well-documented environmental damage caused by deliberately setting fire to heather moorlands (just to enable a ridiculously high density of red grouse that can then be shot), and the unnecessary additional burden on the fire & rescue service at a time of national crisis, it’s actually astonishing that such a selfish practice that reduces air quality is still permitted while the nation struggles against a deadly respiratory virus.

For media coverage about this particular fire: