Those alleged offences included the ‘illegal killing of a short-eared owl, two buzzards and three hen harriers’ that were ‘shot or caught in traps’ on Leadhills Estate since 1 January 2014 (when SNH was first given powers to impose a General Licence restriction). SNH had also claimed that ‘wild birds’ nests had also been disturbed’, although there was no further detail on this. The estate consistently denied responsibility.

[The shot short-eared owl that was found shoved under some heather on the Leadhills Estate grouse moor. Photo by RSPB Scotland]

We were really interested in the details of Leadhills Estate’s appeal so a freedom of information request was submitted to SNH to ask for the documents.

The information released by SNH in response is fascinating. Some material hasn’t been released due to what appear to be legitimate police concerns about the flow of intelligence about wildlife crime in the Leadhills area but what has been released provides a real insight to what goes on behind the scenes.

First up is an eight page rebuttal from Leadhills Estate’s lawyers about why it thinks SNH was “manifestly unfair” to impose the General Licence restriction.

Next comes SNH’s six-page rejection of the estate’s appeal and the reasons for that rejection.

Prepare for some jaw-dropping correspondence from Leadhills Estate’s lawyers, including a discussion about how the raptor workers who found the hen harrier trapped by it’s leg in an illegally-set spring trap next to its nest last year ‘didn’t take steps to assist in the discovery of the suspect, which could have included placing a camera on the nest’.

Are they for real??!! Can you imagine the uproar, had those raptor workers placed a camera pointing at the nest and identified a suspect who was subsequently charged? We’ve all seen how that scenario plays out, with video evidence dismissed as ‘inadmissible’ and the game-shooting lobby leering about the court victory. That Leadhills Estate is now arguing that the failure of the raptor workers to install covert cameras is reason for the estate to avoid a penalty is simply astonishing, although the next time covert video evidence is challenged in a Scottish court it’ll be useful to be able to refer to this estate’s view that such action would be deemed reasonable. Apart from anything else though, those raptor workers were too busy trying to rescue that severely distressed hen harrier from an illegally-set trap: 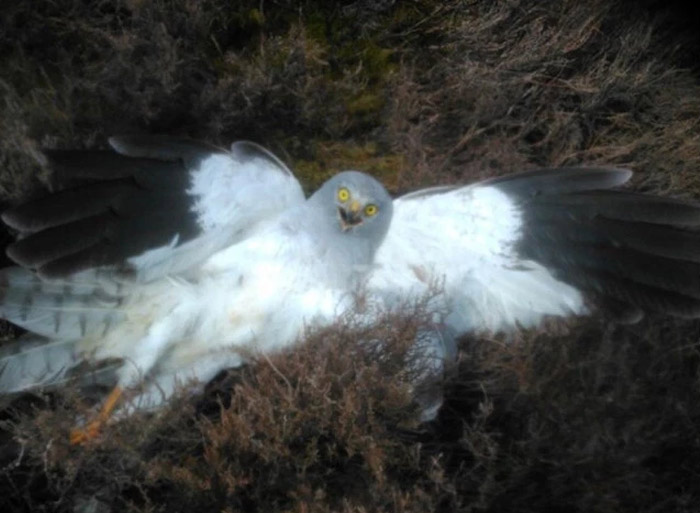 Other gems to be found within this correspondence include the news that a container of an illegal pesticide (Carbosulfan) was found on Leadhills Estate in May 2019 and contributed to SNH’s decision to impose the General Licence restriction (this information has not previously been made public – why not?) and that during a police search of the estate (sometime in 2019 but the actual date has been redacted) the police seized some traps. The details of why those traps were seized has also been redacted but SNH write, ‘Although this in itself does not establish criminality it certainly adds weight to our “loss of confidence” [in the estate]’.

The Estate claims that the alleged impartiality of the witnesses should have some bearing on proceedings but SNH bats this away with ease, saying that the evidence on which the restriction decision was made was provided by Police Scotland and that the partiality of witnesses has not been identified as a significant factor of concern for the police, and thus not for SNH either.

We don’t get to say this very often but hats off to SNH for treating the estate’s appeal with the disdain which, in our opinion, it thoroughly deserves.