Today, Northumbria Police and the RSPB have issued an appeal for information following the sudden disappearance of yet another satellite tagged hen harrier, a female bird known as Ada.

[Hen Harrier Ada being satellite tagged in the summer. Photo from RSPB]

Ada hatched on a nest on the Scottish borders this summer (2019). She was fitted with a lightweight satellite tag as part of the RSPB’s Hen Harrier LIFE project, to learn more about the journeys made by these rare birds of prey and the survival challenges they face.

Ada was the first of the chicks tagged this summer to leave her nest and proved to be naturally adventurous. After fledging she flew north, spending some time on a disused golf course near Dunbar, then she headed south to the North Pennines. On the morning of 10 October 2019 she sent her last transmission from an area of grouse moor east of Allendale, Northumberland. Her tag showed no signs of malfunction and there were several satellites passing over, so it was expected to continue to provide data. RSPB staff were in the area at the time the tag would have transmitted, but neither the bird nor her tag could be found nor have been heard from since.

Her disappearance is being treated as suspicious and was reported to the police.

All birds of prey are protected by the Wildlife and Countryside Act 1981. To kill or injure one is a criminal offence and could result in an unlimited fine or up to six months in jail. Yet the evidence shows hen harriers continue to be killed, or disappear in suspicious circumstances, particularly on or near land managed for driven grouse shooting.

Scientific research published in March 2019 showed that 72% of the satellite tagged hen harriers in their study were killed or very likely to have been killed on British grouse moors, and that hen harriers were 10 times more likely to die or disappear over areas of grouse moor relative to other land uses.

“Over 30 chicks were tagged this summer and we’ve watched with interest as they’ve grown up and flown around the country. We’re absolutely gutted that Ada has disappeared in suspicious circumstances at just a few months’ old.”

“Hen harriers have become a rare breeding bird across the UK mainly due to illegal persecution by humans. In England, the last population survey recorded only four territorial pairs, despite scientific studies showing enough food and habitat to support over 320 pairs. Our own tagging work has shown that survival of young birds post-fledging is very low. This won’t change until something is done about illegal persecution. The Government’s own data has highlighted a loss of 72% of their tagged birds in suspicious circumstances, and we are calling on them to take vital measures to address this appalling situation.”

The RSPB is calling for the Government to introduce of a system of licensing for driven grouse moors, whereby this license to operate could be taken away should illegal activity be uncovered. We believe that this approach will act as a far greater deterrent than current legislation.

If you have any information relating to this incident, call Northumbria police on 101.

If you find a wild bird of prey which you suspect has been illegally killed, contact RSPB investigations on 01767 680551 or fill in the online form.

It looks like Ada has vanished in the North Pennines Area of Outstanding Natural Beauty (AONB): 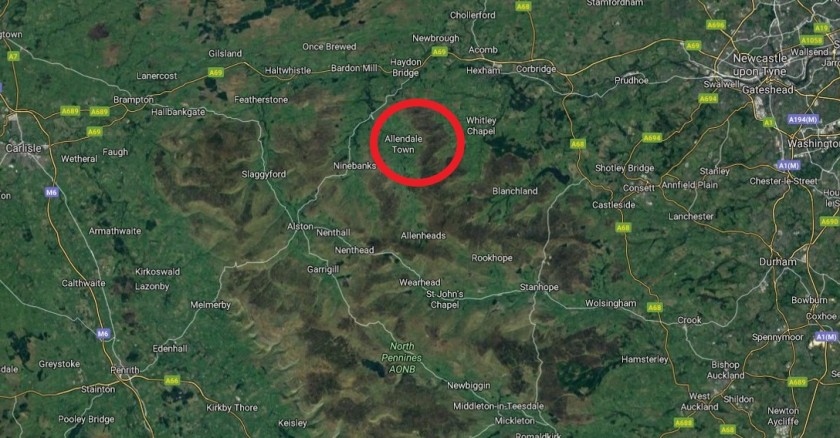 The tag Ada was carrying is believed to be the same make and model as the other tags deployed by the RSPB on hen harriers (the tag with a known reliability rate of 94%). Technical failures are possible (of course) but are rare (6%), and according to this research “tag failures have always been preceded by irregular transmission periods and, most importantly, a drop in battery voltage (another parameter monitored by the transmitter). This makes it relatively straightforward to distinguish between a likely mortality event and a likely transmitter failure”.

The hen harrier tags deployed by the RSPB are completely different to the new and untested tags that were deployed by Natural England on some of this year’s brood meddled hen harriers; tags that are known to have a high failure rate.