Revive, the coalition for grouse moor reform held its first ever fringe event at a party political conference yesterday, at the Scottish Labour conference in Dundee.

The event was chaired by Claudia Beamish MSP and three speakers from Revive joined the panel (Dr Ruth Tingay of RPUK, Max Wiszniewski, Revive Campaign Manager, and Dr Craig Dalzell, Head of Policy & Research at Common Weal) with another coalition member (Dr Richard Dixon, Director of Friends of the Earth Scotland) in the audience. 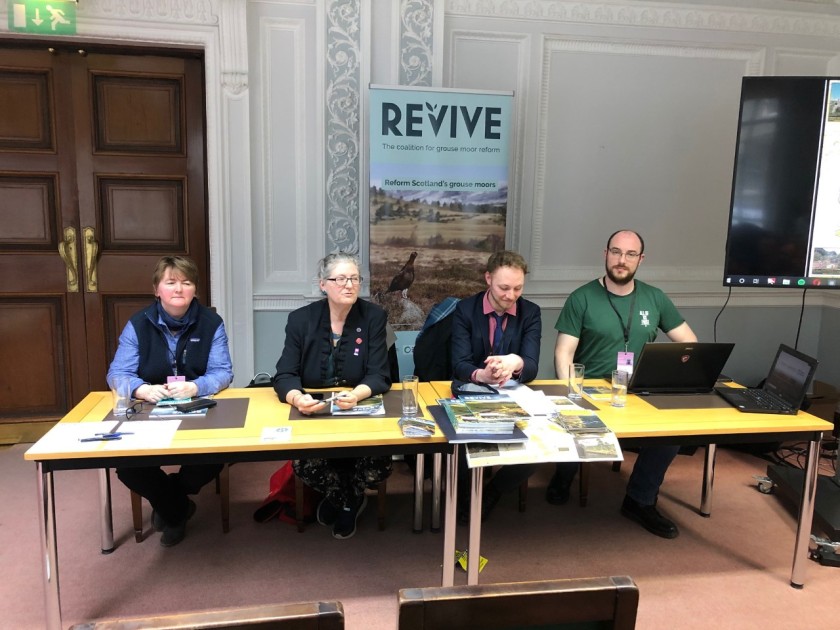 Each speaker gave a ten minute presentation followed by approx 20 minutes of questions from the floor.

It was brilliant to see a number of journalists in the audience, resulting in some good coverage in the papers today.

The Herald focused on the illegal persecution of golden eagles and hen harriers on or close to driven grouse moors and journalist Alistair Grant got the message loud and clear that, in our opinion, the extent of this persecution on many driven grouse moors is such that it amounts to serious organised crime. [Definition by the National Crime Agency: ‘Serious crime planned, coordinated and conducted by people working together on a contuining basis. Their motivation is often, but not always, financial gain‘] 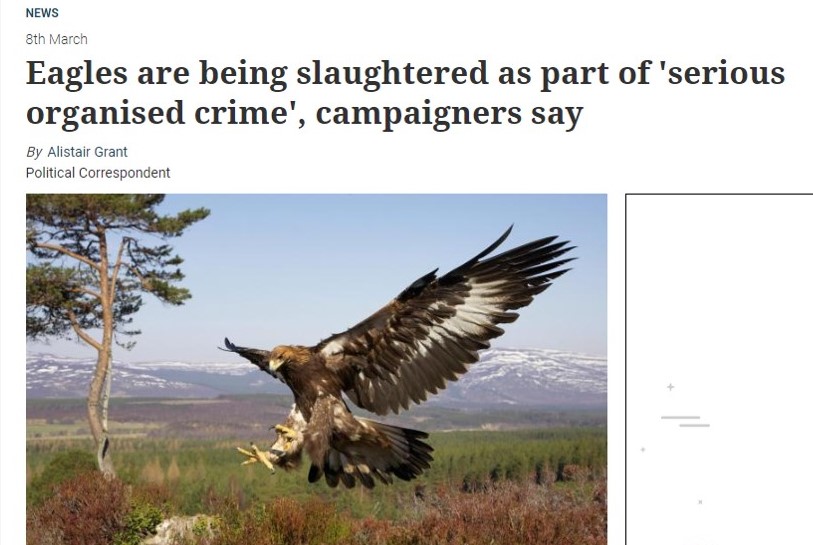 Here’s the text from The Herald article:

GOLDEN eagles and other protected birds of prey are being illegally slaughtered in what amounts to “serious organised crime”, a leading expert has said.

Dr Ruth Tingay of Raptor Persecution UK said birds are being killed on or near grouse moors across Scotland before the evidence is then removed to avoid prosecution.

She spoke out during a fringe meeting at the Scottish Labour conference in Dundee.

Claudia Beamish MSP, the party’s environment spokeswoman, said it backed strict new rules for estate owners – including a total ban on the use of lead shot and the large-scale cull of mountain hares.

She said: “In order for grouse moors to continue, if indeed they do, there needs to be very robust licensing.”

Revive, a coalition of organisations calling for change, insisted estates should be stripped of this cash as part of a crackdown aimed at encouraging radical land reform.

Meanwhile, there is evidence scores of birds have been illegally killed on or near estates, it said.

Dr Tingay, a leading raptor ecologist, said: “My argument is that what we are seeing here – not just with golden eagles but with other birds of prey, particularly hen harriers, which are also persecuted on driven grouse moors – is serious organised crime.

“If the Government accepted this, we would see a lot more resources coming in to deal with this issue.”

She said some estimates suggest 50 eagles a year are disappearing.

Revive is made up of Raptor Persecution UK, Friends of the Earth Scotland, animal charity Onekind, the League Against Cruel Sports Scotland and think tank Common Weal.

Craig Dalzell, head of policy and research at Common Weal, said estates should be opened up to other uses.

He said grouse moors in Scotland had an annual economic impact of £32 million and were responsible for around 2,640 jobs.

In comparison, forestry boasts an annual economic impact of £973m and creates 26,000 jobs, he said.

The Press & Journal also covered this fringe event and journalist Tom Peterkin headlined with this: 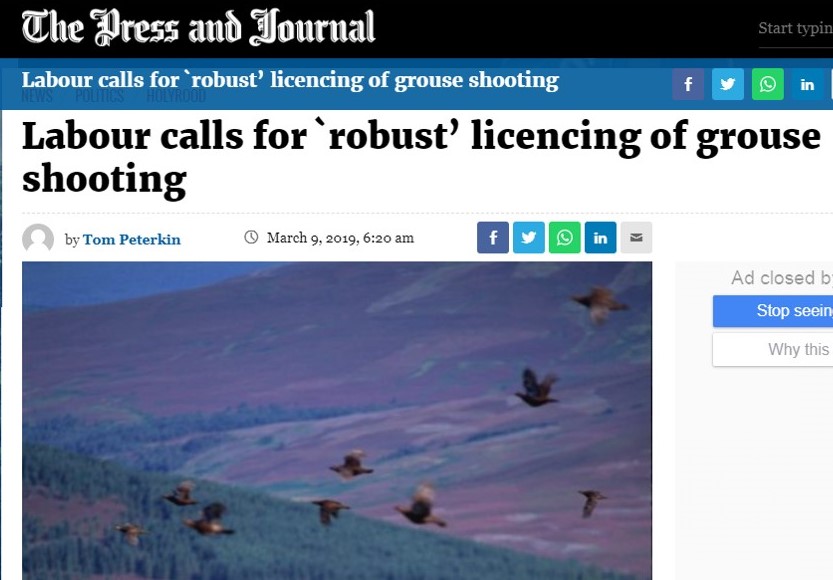 Here’s the text of the P&J article:

Labour has said there should be robust licencing of grouse shooting amid claims that illegal wildlife killing on sporting estates amounted to “serious organised crime”.

The call was made by Shadow Environment Secretary Claudia Beamish at a Labour conference fringe meeting where she cast doubt on the survival of the pastime in the long-term.

The meeting was hosted by Revive, an organisation campaigning for the reform of the country sport and whose agenda includes stripping grouse moor landowners of public subsidies.

Speaking at the meeting, Ms Beamish said it would be “valid” for a licencing system to take into account issues raised by Revive.

Ms Beamish said: “I think that in order for grouse moors to continue – if indeed they do – there needs to be very robust licencing and robust monitoring.”

Ms Beamish made her remarks after campaigners claimed grouse moors only supported 3,000 jobs on an average salary of £11,500 despite accounting for almost one fifth of Scottish land.

Max Wiszniewski of Revive said his organisation was “not going for a ban” on grouse shooting “however understandable that would be”.

Rather Revive’s focus was to reform it as much as possible, including an end to government subsidies, heather burning limits, a lead ammunition ban, a ban on snares and more action against wildlife crime.

He said: “The question may come about if the industry can’t survive after the necessary reforms, it possibly has to reflect on itself.”

This was a very worthwhile event. Revive signed up more supporters to its pledge for grouse moor reform (you can sign online here if you haven’t already done so), it was an opportunity to interact with a number of politicians who were keen to learn more about the Revive campaign and the media was interested in what we had to say.

Well done to Max (Revive Campaign Manager) for organising this event and many thanks to Claudia Beamish MSP for her interest and support.

Revive will be at other party political conferences later this year.