Further to our lunchtime blog (here) about the Scottish Gamekeepers Association fabricating a story about a supposed “re-sighting” of a satellite-tagged hen harrier (Saorsa) who disappeared in suspicious circumstances in the Angus Glens in February 2018, the RSPB has just issued the following press statement:

Ian Thomson, RSPB Scotland’s Head of Investigations said; “The SGA’s claims about the hen harrier “Saorsa” are completely false and are totally at odds with what the police have informed us today. This bird has been missing since February 2018, when it was reported to the police. There isn’t a shred of evidence to support the claim that it has reappeared, and its tag has not transmitted any data since the date of it vanishing in suspicious circumstances.

“The SGA has refused to attend meetings of the Partnership for Action Against Wildlife Crime since the publication of the Scottish Government’s review of satellite tagging in May 2017, and has consistently refused to accept the findings of that review. Their repeated baseless attempts to discredit proven technology and question the reputations of respected scientists and Scottish Government reports are entirely due to the fact that the use of this technology is shining an increasingly bright light on the widespread criminality associated with intensive grouse moor management.”

[Hen harrier Saorsa has not been since since she disappeared in suspicious circumstances in the Angus Glens in Feb 2018. Photo by Brian Etheridge] 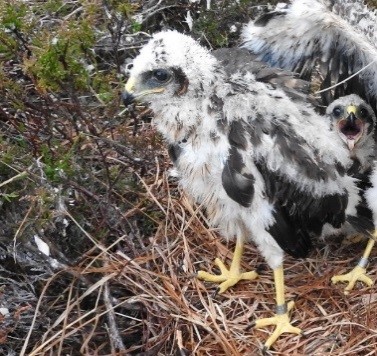