We were recently informed that a peregrine had been found dead in the Pentland Hills near Edinburgh way back in May this year (five months ago). We were also advised that toxicology results had shown it had been poisoned with a banned poison.

Given the location, a few miles from where golden eagle Fred had ‘disappeared’ in highly suspicious circumstances in January (see here), we were obviously very interested in this case.

We hadn’t seen any media from Police Scotland about this poisoned peregrine – no appeals for information, no warnings to the public about the use of a banned poison in a regional park popular with the visiting public, nothing.

So last week we started asking questions and this morning Police Scotland advised us that the following statement had just been issued:

Police Scotland received a report of a dead peregrine falcon on Thursday 25 May 2018 in the Pentland Hills near Edinburgh.

The dead bird was recovered from the Green Cleuch area of the hills in Midlothian.

Detective Constable Andrew Loughlin said: “After extensive inquiries were carried out in collaboration with partner organisations, the bird was found to have been poisoned.

Our investigation has concluded that this appears to have been deliberate as we do not believe that under the circumstances the poison could have been used legitimately.

The investigation has now concluded and no further Police action is being taken at this time.

We take wildlife crime like this very seriously and would urge anyone who has information about crime involving birds of prey to contact Police Scotland on 101 or make a report anonymously to the charity Crimestoppers on 0800 555 111.”

[Aerial photo of Green Cleugh, at the edge of the grouse moor at Black Hill – photo from Eastside Cottages website]

According to local Raptor Study Group fieldworkers, this peregrine was an adult male and was raising a brood of chicks in the area in May 2018. Three days after his body was found, the adult female and all the chicks had ‘disappeared’.

This case raises a number of questions and we’ll be returning to some of those shortly.

For now though, why the hell wasn’t this case publicised? If we hadn’t chased it up, would it ever have come to light?

This was a banned poison. We don’t know which one because that’s a secret apparently, but we do know it’s one of eight poisons listed on The Possession of Pesticides (Scotland) Order 2005 which are so dangerous that it’s an offence to even possess the stuff, let alone use it.

And to use it in the Pentland Hills Regional Park – an area that attracts approximately 600,000 visitors a year, including families walking with children and pets. Why weren’t those visitors warned that a banned poison had been used that could have potentially fatal consequences if even touched?

Here’s the poisoned peregrine, right next to the public footpath: 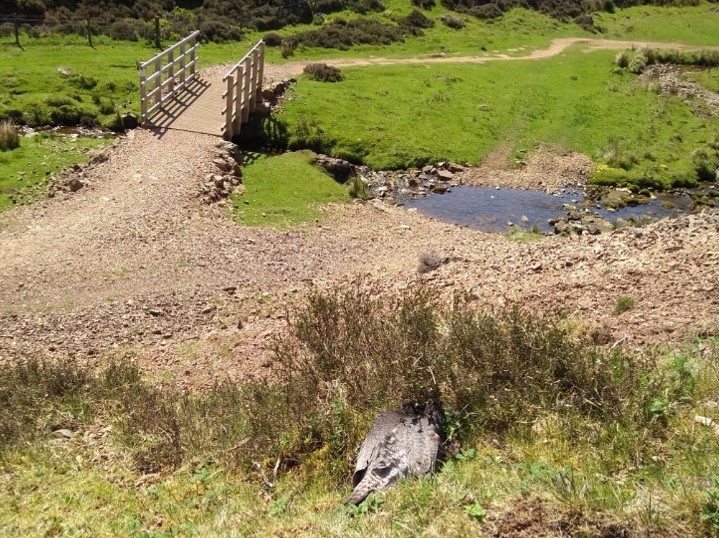 Who knew about this case and who made the decision to keep it quiet?

Was it a politically-motivated decision? We know there is huge sensitivity about illegal raptor persecution in south Scotland just now, with the start of the Government-backed translocation of golden eagles in to the region this year and SNH pretending that “persecution is not an issue” [in south Scotland] (see here).

It clearly bloody is an issue and we’ll be asking several politicians to look in to the handling of this case.

More on this, and other questions, shortly.

UPDATE 10 Oct 2018: BBC News has picked up on this blog  – Police criticised over bird of prey poisoning in Pentland Hills (here)