Species Champions are members of the Scottish Parliament who have agreed to lend their political support to the protection of Scottish wildlife, in an award-winning scheme organised by Scottish Environment LINK.

As a long-time reader and supporter of this blog, Andy shares our concerns about the on-going threat to golden eagles from illegal persecution in some areas of Scotland. He’s also well aware of the compelling evidence published in the Scottish Government-commissioned review of the fate of satellite-tagged golden eagles, which demonstrated that almost one-third (n = 41) of sat-tagged eagles in Scotland have ‘disappeared’ in suspicious circumstances, most of them on or close to intensively managed driven grouse moors.

As many of you will know, last year in partnership with Chris Packham we satellite-tagged a shedload of golden eagles as part of a wider collaborative scientific study on the dispersal and land-use of juvenile golden eagles, to help inform conservation planning for this species. One of those eagles, Fred, ‘disappeared’ from the Pentlands in January this year in the same highly suspicious circumstances as the other 41 ‘missing’ eagles (and this grim tally has since increased following the recent suspicious disappearance of golden and white-tailed eagles on grouse moors in the Monadhliaths (here), the Cairngorms National Park (here), and the Strathbraan area of Perthshire (here)).

This year we’ve satellite-tagged more eagles (another shedload) and Andy joined a team of expert licensed fieldworkers from the Scottish Raptor Study Group, who, with support from local landowners, have been visiting nest sites across Scotland.

We anticipate releasing a short film and an interview with Andy in due course.

Meanwhile, here’s one of this year’s satellite-tagged golden eagles. This is ‘Adam’, named by Andy in tribute to Dr Adam Watson, an influential character during Andy’s formative years on the hill! 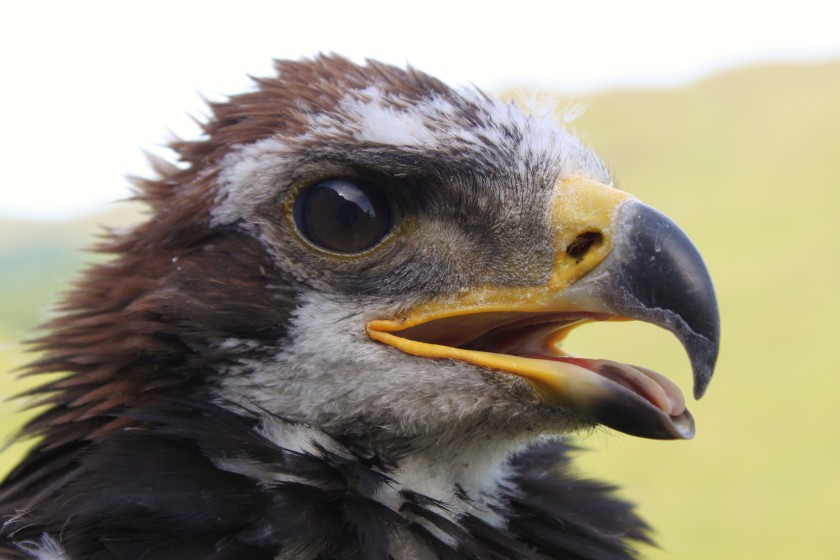