The South Scotland Golden Eagle Project, which proposes to translocate eaglets from the Highlands to southern Scotland in an effort to boost the tiny remnant population in the Borders & Dumfries & Galloway, has finally been given the funds and licence to begin.

Earlier this year the project was awarded £1.3 million from the Heritage Lottery Fund (see here) and has now received match funding of £158,024 from local LEADER programmes. SNH has also now granted the licence required to move the eagles, fit them with satellite tags and release them in the Moffat Hills.

[Photo of a young satellite-tagged golden eagle, by Ruth Tingay]

This additional funding has triggered the recruitment of four new project staff – an eagle officer, two community engagement officers, and one stakeholder engagement officer. Details of these positions and how to apply can be found on the Project website here (scroll to the bottom of the homepage). Closing date is 12 January 2018.

As an aside, can we just congratulate the Project team on their website – full of information & official reports, keeping the public informed about the proposed Project. Take note, Natural England!

A press release (unfortunately with far too many naff metaphors) from the Project has been picked up by various media outlets (e.g. BBC News here, Scotsman here) although the Guardian has taken a different angle and focuses on the threat these birds might face if they fly south of the border in to northern England (here).

We’ve blogged about this Project before (see here, here) and have mixed feelings. Unsurprisingly our biggest concern is the on-going threat of illegal persecution, both north and south of the border. To date, nobody has EVER been successfully prosecuted for the illegal killing of golden eagles, despite plenty of opportunities (e.g. see here and here).

Dr Cat Barlow, the South Scotland Golden Eagle Project Manager, has been questioned about the threat of illegal persecution at several conferences where she has delivered an otherwise strong presentation about the Project. On each occasion she has acknowledged the threat and has recognised that not all estates in southern Scotland are supportive of this translocation. She recently told a conference in Edinburgh that she “will be talking to the estates not yet on board“.

It’s going to take more than a chat to stop these deranged raptor killers in their tracks.

[Photo of an adult golden eagle found shot & critically injured on a grouse moor in south Scotland in 2012. He didn’t make it] 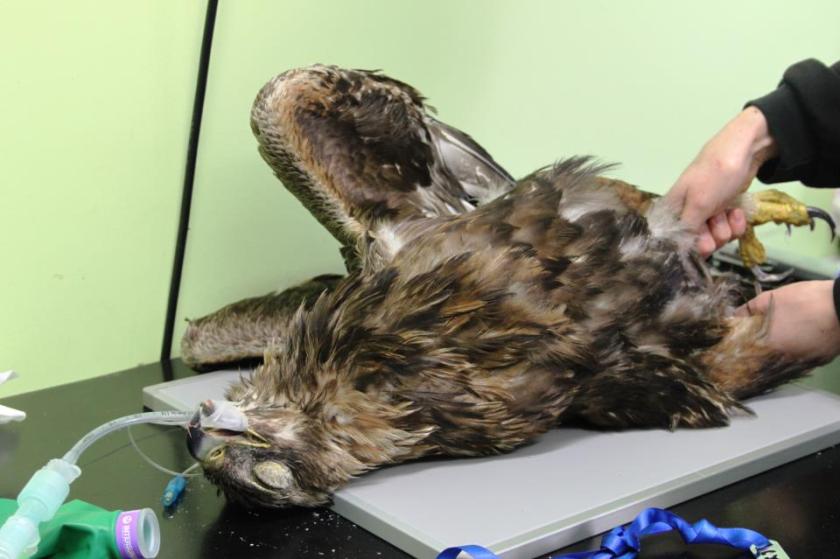