Last month we blogged about yet another satellite-tagged hen harrier that had suspiciously ‘disappeared’ on a grouse moor in the Yorkshire Dales National Park (see here). We only knew about it because North Yorkshire Police mentioned it on Twitter and posted a few photographs from the search scene:

We made a general enquiry to Natural England and asked for further details (which hen harrier it was, where and when it was satellite-tagged, on which grouse moor it had ‘disappeared’ in the Yorkshire Dales National Park). Natural England refused to provide any detail, other than that ‘key stakeholders’ (i.e. the landowner!) had been notified. The landowner had probably been more than ‘notified’ – if Natural England was following the ridiculous ‘satellite tag protocol’, the landowner’s ‘permission’ would have been sought to conduct the police search! Honestly, you couldn’t make this stuff up.

Anyway, back to the hen harrier. We weren’t happy that Natural England was withholding information on what was probably a publicly-funded satellite tag so we submitted a formal FoI to request this information. We managed to find out some details:

Why Natural England didn’t release this information when we first asked for it is anybody’s guess – just following its normal practice of putting obstacles in the way, hoping that we’d shuffle off and forget about it, probably.

Anyway, we now know that this missing hen harrier is ‘John’, who was tagged on 8 July 2016 in Northumberland. We blogged about John in February 2017 (see here) – he was the mystery hen harrier about which little was known. We still don’t know very much about him because Natural England has chosen to remain silent on his movements over the last 14 months [but see UPDATE below], although from the updated spreadsheet that Natural England published in September, we know that his tag was transmitting in September 2017 in Northumberland. See: hen-harrier-tracking-data-2002-onwards

We also know that Natural England realised John’s tag was no longer transmitting on 5 October 2017 and that North Yorkshire Police conducted a search for him ten days later (15 Oct 2017) on a grouse moor in the Yorkshire Dales National Park. What we still don’t know is the name of this grouse moor and whether North Yorks Police found any evidence such as a tag or a corpse.

We’ll be submitting an FoI to North Yorkshire Police to ask about this – it’ll be very interesting to see the response. North Yorkshire Police appear to have upped their game recently in terms of investigating suspected raptor persecution crimes – a very welcome and much-needed change of pace in England’s leading raptor-killing county. Let’s see how open they’ll be about this latest investigation.

Meanwhile, it’s time to update the list of what hapened to the satellite-tagged hen harrier class of 2016, which includes harriers tagged by Natural England and the RSPB: 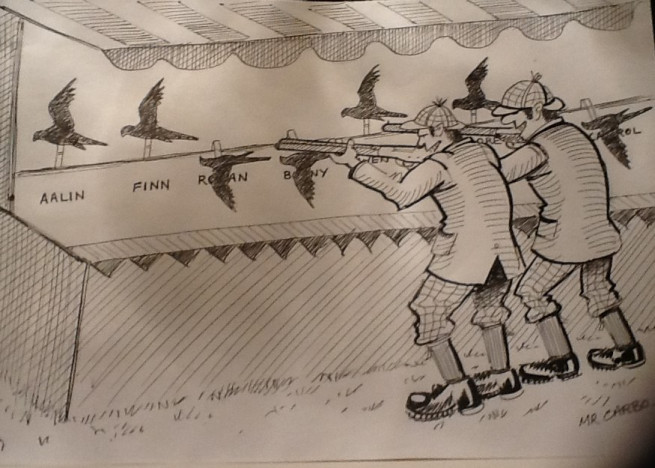 UPDATE 20 November 2017: Thanks to the blog reader who pointed out that John had been recorded at Langholm in the summer of 2017, as mentioned in the hen harrier update on the Langholm Demonstration Project website on 28 June 2017 – here.