As many of you will know, DEFRA’s Hen Harrier (In)Action Plan was launched in January 2016. We’ve been particularly interested in two of the six ‘action points’: Brood meddling, and a ‘reintroduction’ of hen harriers to southern England.

We blogged recently about how this year Natural England has been refusing to release any more information about the brood meddling plan (see here). Today’s blog (and several to follow) is an update on the southern ‘reintroduction’ project, following the release of various documents under FoI that has taken us seven months to prise from NE.

As a quick recap for the benefit of new readers, here’s what we were able to find out about the southern reintroduction plan last year:

So, the first update for this year is that Natural England has appointed a Hen Harrier Southern Reintroduction Project Manager. His name is Simon Lee and he has been an NE employee since 2000, so is probably regarded as a safe, reliable option. Here’s a bit about his career history that we found on an old website:

Simon’s experience working on Dartmoor may well have been a key consideration for this new appointment (that will become clearer in a later blog).

Simon has been busy getting up to speed with the project, having interesting chats (more on this later), visiting a potential donor site in France (more on this later) and, according to this short update he wrote for a recent Natural England Board Meeting, he’ll be helping to establish a technical group to produce a technical project plan. He might be doing other things too but NE redacted the second paragraph: 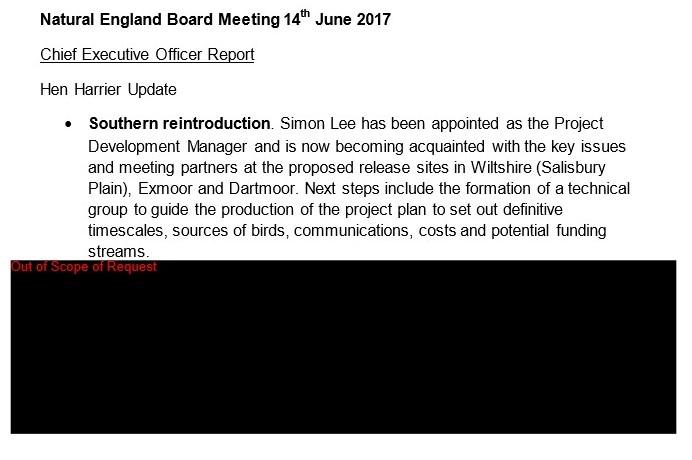 It’ll be interesting to see who is invited to serve on the technical group. As Mark Avery pointed out at the beginning of the year (here), the composition of the southern reintroduction project group “hardly looks like a list of independent experts“.