This is Part 2 of a two-part blog. For Part one, please read here.

The following information is a timeline of what happened and has been compiled from a series of FoIs. Natural England has refused to release some of the information we asked for (notably a copy of the post mortem report that was paid for with tax payers’ money, but also some email correspondence) because apparently this may ‘affect the course of justice’.

His corpse was collected by Stephen Murphy (Natural England) and sent to the Zoological Society of London for a post mortem on 24 October 2016.

Cumbria Police launched an investigation the same day, based on the findings of the preliminary post mortem report (i.e. that Rowan had been shot): 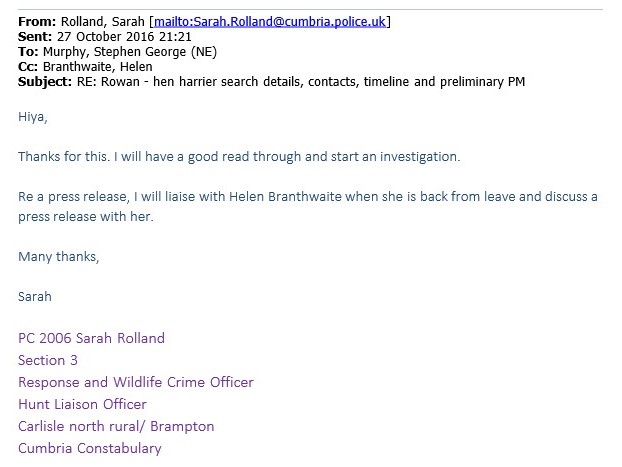 The following day, on 28 October 2016 (the Friday before the Monday Westminster debate on driven grouse shooting), Natural England and the Hawk & Owl Trust issued the following vague joint press statement:

The body of a juvenile, male hen harrier – named Rowan – was recovered in Cumbria on 22nd October. He was satellite tagged at the Langholm project in the Scottish borders, as part of a joint venture between Natural England and the Hawk and Owl Trust. Following an autopsy, Natural England has passed details to the police for investigation.

We are unable to make further comments or enter into discussion at this time as this may be prejudicial to ongoing investigations.

On 3 November 2016, WCO Helen Branthwaite of Cumbria Police sent a copy of a draft press statement about Rowan’s death to Natural England. Pay close attention to the wording of this draft police press statement, particularly the sentence, ‘Following a post mortem examination funded by Natural England it has been established that the bird was shot’:

WCO Helen Branthwaite replied to Stephen Murphy to say she couldn’t get hold of the Natural England press officer (Lyndon Marquis) and asked if anyone else at Natural England should take a look over the draft police press statement:

At this point, the email chain goes cold (so either this conversation ended here or, if it did continue, Natural England has decided to withhold this information from the FoI response).

We don’t know if that telephone conversation took place because if it did, there won’t be a written record of it, but it is clear that the intention to have a conversation was there.

Cumbria Police have opened an investigation into the death of a hen harrier.

The body of a male Hen Harrier was found in the Ravenstonedale area of the county on 22nd October 2016. A post-mortem examination funded by Natural England and carried out by the Zoological Society of London has established that the bird was likely to have been shot.

The hen harrier, called Rowan, was satellite tagged at the Langholm Project as part of a joint venture between Natural England and the Hawk and Owl Trust. The bird had recently flown in the Cumbria and North Yorkshire Dales area before being found at Ravenstonedale.

Hen Harriers are specially protected under the Wildlife and Countryside Act, and the Government has set raptor persecution as one of their wildlife crime action priorities.

There is huge pressure on the survival of the hen harrier in England particularly and projects such as this are working hard to assist with the bird’s survival. Cumbria Police are working alongside such organisations to progress this investigation.

Anyone with information is asked to contact police on 101 and ask to speak to PC 2059 Helen Branthwaite.

This raises some really interesting questions.

It is apparent from the wording in Philip Merricks’ email that Rob Cooke (Natural England) was going to “sign off” the police press statement so did Natural England and the Hawk & Owl Trust collude to have this detail changed? It would certainly be in both their interests to have it changed because a ‘muddied’ ambiguous statement about a ‘likely shot’ hen harrier is far less damaging to their friends in the grouse shooting industry than a clear, evidence-based confirmatory statement that a hen harrier had been shot, especially at the time when driven grouse shooting and its associated criminality was being debated at Westminster.

If there was any doubt in WCO Helen Branthwaite’s mind that Rowan had been shot, did she contact the pathologist at ZSL for clarification or did she just accept the word of Natural England / Hawk & Owl Trust? If so, why?

These questions could easily be answered if we had sighting of the post mortem report, because then we’d know whether the final Police press statement was an accurate reflection of the post mortem’s findings or whether it was a cover-up job, but Natural England has refused to release it. Quite how the publication of a shot bird’s x-ray ‘might affect the course of justice’ is a mystery, especially when many police forces routinely publish such images as part of their appeals for information.

Unless of course Natural England is worried that its release might affect the uncovering of corruption….