The long-awaited judicial review of SNH’s decision to impose a General Licence restriction order on Raeshaw Estate finally gets properly underway this week.

SNH imposed the General Licence restriction on Raeshaw Estate (a grouse moor estate near Heriot in the Scottish Borders) in November 2015. The restriction was implemented due to alleged raptor persecution incidents reportedly taking place on the estate (according to evidence provided by Police Scotland), even though nobody has been charged with any criminal offence and the estate has denied any responsibility.

In April 2016 Raeshaw Estate petitioned for a judicial review of SNH’s action. Since then there have been a number of preliminary hearings but now the case has reached the final stage – a two day substantive hearing will take place tomorrow and Friday (Thurs 12 & Fri 13 Jan 2017) at the Court of Session. 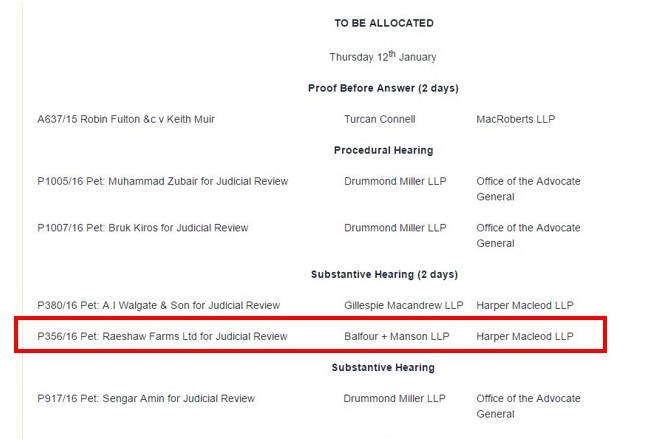 We have no idea when the legal ruling will be made public; it could be a matter of days or it could be months.

This judicial review is an important test case with potentially far-reaching consequences. If the court decides that SNH acted fairly, then presumably SNH will get on with issuing other General Licence restrictions to other estates where Police Scotland has evidence of raptor persecution incidents having taken place since 1 January 2014. There are several of which we’re aware. Although it could be argued that if SNH continues to subsequently issue ‘individual’ licences to those penalised estates, the purpose and effectiveness of the original General Licence restriction order is lost (e.g. see here, here).