‘Tarras’, a young hen harrier from this year’s Langholm cohort, has ‘disappeared’ in the Peak District National Park. 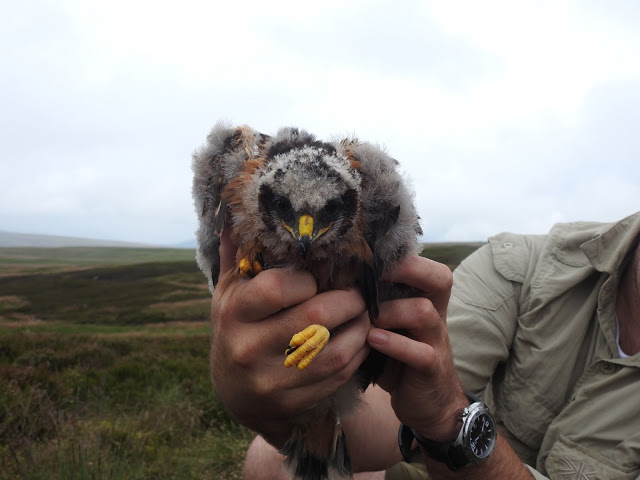 The following statement has been issued on the Langholm blog:

We have concerns for ‘Tarras’ a young female Hen Harrier tagged by Stephen Murphy (Natural England) at Langholm this summer.

The transmitter on the juvenile Hen Harrier Tarras has not transmitted since the 23rd October. The area has been searched and nothing was found and no hen harriers were seen in the area.

The last known fix area is on land owned by United Utilities in the north Peak District.

Tarras flew south from Scotland in the last weeks of September, arriving in the Nottingham area on the 11th October. She then headed north through Staffordshire and was roosting in the Peak District, near to the last known fix area on 13th October.

Tarras’ transmission period (duty cycle) was regular until 23rd October; on 23rd October it ran a complete transmission period (e.g. no sudden cessation of data within the 10hr transmission period). The local weather in the days immediately after 23rd were damp and overcast so this can delay the recharge time. However, by 26th concerns were raised. We have some evidence that suggest this may be a tag failure and we are currently trying to gather more information to help us resolve this.

That final sentence is a bit strange, and is at odds with what has been reported about the tag’s last smooth-running duty cycle. It’s worth revisiting a comment about tag reliability made recently by experienced researcher Dr Raymond Klaassen, who has been using satellite tags to track the movements of Montagu’s Harriers:

“Technical failures generally are rare. We have recorded a few throughout the years (6% of all cases), however failures have always been preceded by irregular transmission periods and, most importantly, a drop in battery voltage (another parameter monitored by the transmitter). This makes it relatively straightforward to distinguish between a likely mortality event and a likely transmitter failure“.

So, given Tarras’ tag was not transmitting irregularly prior to her disappearance, what ‘evidence’ does Natural England have to ‘suggest this may have been a tag failure’?

It’s all a bit vague, isn’t it? A bit like the information put out about hen harrier Rowan who, according to Cumbria Police, was “likely to have been shot” in the Yorkshire Dales National Park.

We look forward to a timely update from Natural England about Tarras’ disappearance in the Peak District National Park.

UPDATE 16 March 2021: Interestingly, ‘Tarras’ is not listed on Natural England’s database of satellite-tagged hen harriers – why is that? See: https://www.gov.uk/government/publications/hen-harriers-tracking-programme-update/hen-harrier-annual-tracking-update