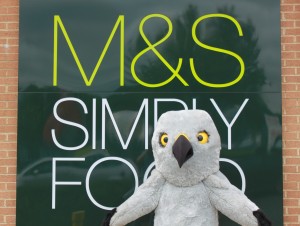 Marks & Spencer has announced it will not stock red grouse this year.

Using the same excuse as it did last year (see here), M&S claims there are not enough red grouse available from its (unidentified) source estate. What M&S don’t say is that there is probably considerable nervousness amongst the Board that had they stocked red grouse this year, the first customer through the door would be Mark Avery, who had promised (here) to test the M&S grouse for lead levels. It could have been embarrassing for M&S, just as it was for Iceland stores last year (see here).

The statement includes a bit more information about the ‘exclusive’ estate in question, saying that ‘many different raptor species, including hen harriers, thrive there’.

Hmm. Given that they’ve previously said this estate is in Scotland, the only driven grouse moor that we’re aware of where hen harriers could be said to be ‘thriving’ is Langholm. Are other raptors ‘thriving’ there? Many are doing pretty well, although if Mark Oddy has his way (see here), buzzards may not be very welcome for long.

The statement also waxes lyrical about M&S’s unique ‘Code of Practice for sourcing red grouse’ and how M&S hopes this Code will ‘help the whole industry learn and improve’. It would help if M&S published this Code but so far, they’ve refused.

Anyway, for now, the news that M&S will not be selling red grouse this year is a good result.

This is turning in to the best Inglorious 12th ever, especially as the e-petition to ban driven grouse shooting has just soared past 92,000 signatures.