On Wednesday 24th February 2016 at around 11am, two birdwatchers were out walking on the moors in Derbyshire hoping for a view of a ringtail hen harrier that had been reported in the area the day before.

One of these birdwatchers spotted a grey raptor with black wing tips, perched approx. 1km away and the observer believed he was looking at a male hen harrier. As he was explaining the location to his colleague so he too could see the bird, his colleague said: “An armed man dressed in camouflage has just jumped in to the heather no more than 10-20m from the bird”. Both observers scanned out from the bird and saw the armed man crouching in the heather, and they also noticed a green Land Rover parked on the moor, approx. 500m from the bird.

The two observers sat and watched for a few minutes while deciding what to do, and then managed to film some footage via digiscope. Here’s a still image from that footage: 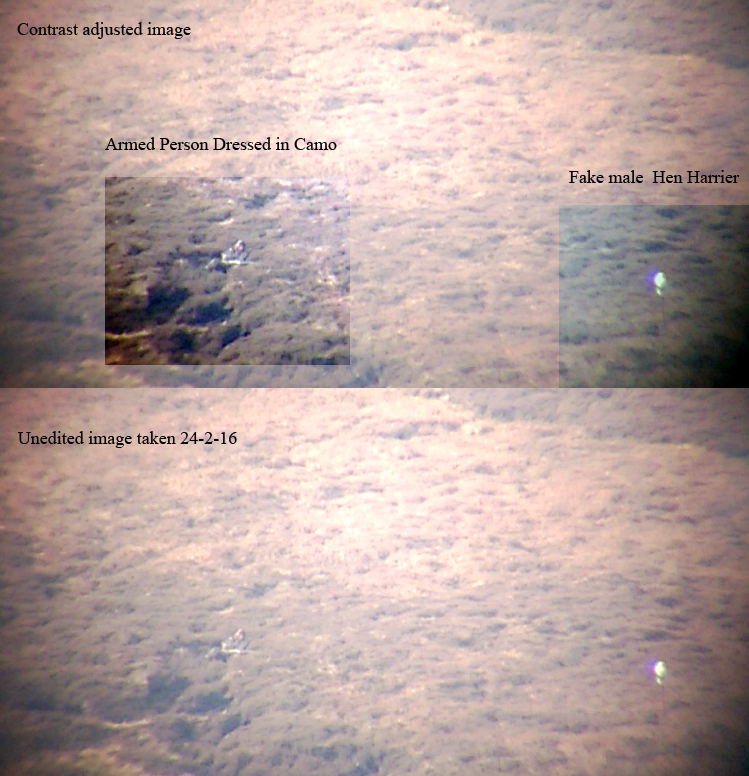 As soon as the two observers had stopped filming, the armed man immediately ran over to the bird, picked it up and walked hurriedly away in the opposite direction to the observers.

What the two observers had witnessed was, of course, a fake hen harrier. Some might call it a decoy, but that would imply that the fake hen harrier was being used as a lure to draw in a real male hen harrier who would probably want to attack the decoy as part of his territorial defence strategy. While the real hen harrier was busy attacking the decoy, anybody crouched nearby with, say, a shotgun, would be given an easy opportunity to shoot and kill the real bird.

But surely that’s not what was happening on this moor. This isn’t just any moor. We’re not going to name the moor/estate because we need to protect the identities of the two observers and also the identity of the person who sent us the footage. However, Derbyshire Constabulary is aware of the location, as is the National Trust. What we can say is this moor is a driven grouse moor, on National Trust property, within the Peak District National Park. It is also part of the Peak District Bird of Prey Initiative.

But all is not lost, as according to a statement by Amanda Anderson, Director of the Moorland Association:

“We are renewing our action plan and redoubling our efforts to ensure that this brings improved results.  The partnership has also agreed that this work needs to be extended to cover other species, notably goshawk and hen harrier, and to include the South West Peak.”

“We will be using the new rigour and energy recently brought to the project to seek to restore breeding success of our iconic bird of prey species in the National Park. We will be seeking a greater level of commitment from partners in the Initiative to reverse the fortunes of birds of prey.”

Nope, nothing there about using a decoy hen harrier to lure in a real hen harrier so it can be killed, illegally, with ease, so there must be another explanation.

Perhaps the grouse-shooting industry will tell us that the decoy hen harrier was being used legitimately to lure in crows. Crows and other so-called ‘pest’ species would be attracted to a decoy raptor as they’d try to mob it in an attempt to harass the ‘predator’ into leaving the area. Luring in crows with a decoy would allow a gamekeeper to lawfully shoot the crows at close range. But hang on, let’s think about this. Gamekeepers already have several methods of luring crows, e.g. crow cage traps, Larsen traps, clam traps etc, all of which are effective techniques and don’t require the gamekeeper to be present for hours on end, thus freeing up his time to undertake other ‘vital conservation’ work such as torching the heather or spreading toxic veterinary medicines across the moor. And why choose a male hen harrier as the decoy species and go to all the trouble of having to make it? Why not use a readily available crow decoy that can be bought online for a couple of quid? Or a plastic eagle owl decoy, also cheap and readily available to buy at most garden centres? Nope, ‘It’s a hen harrier decoy to attract crows’ would be a wholly implausible explanation. There must be another reason why this armed man was observed crouching near a fake hen harrier and why he took off with it as soon as he realised he’d been seen.

Perhaps this armed man’s behaviour was part of DEFRA’s Hen Harrier Recovery Plan? Er, nope, can’t see anything in the plan that says sitting with a shotgun close to a fake hen harrier will contribute anything towards this species’ recovery. There must be another explanation. But what can it be?

Why don’t we ask some of the partners in the Peak District Bird of Prey Initiative, and some of the organisations signed up to DEFRA’s Hen Harrier Recovery Plan, what, exactly, they think is happening in this video?

Do they think it might show the preparation of an imminent wildlife crime? Even though the footage doesn’t show illegal activity per se, the observed scene has all the hallmarks of potentially turning in to something much more sinister. Don’t know about you, but it makes us wonder about those five male hen harriers that ‘disappeared’ last summer.

All of these partners and organisations have said, repeatedly, that they operate a ‘zero tolerance’ approach to illegal raptor persecution, so now’s their opportunity to demonstrate it. What action, if any, do these organisations intend to take in response to this footage? Their responses (which we’ll publish here) will tell us whether they’re serious about implementing a zero tolerance approach or whether they’re just faking it.

So, two questions. How do the individuals (below) explain what is happening in this video, and what action do they intend to take? Emails please to:

For those of you who share our view of what was probably going on in this video, you might want to consider joining 31,000+ people who have had enough of this disgraceful charade by signing HERE

UPDATE 11.20hrs: Mark Avery’s view on what should happen next – here

UPDATE 28th April 2016: BBC news has an article on this story here