Our [CNPA’s] statement in response to the mountain hare cull which was reported in the media at the weekend.

Hamish Trench, Director of Conservation and Visitor Experience said  “CNPA has previously set out concerns about the balance of moorland species and habitat management and the need for better data on mountain hare populations is part of this. Observation suggests there is a good population of mountain hares in the Cairngorms and the managed moorlands provide a good habitat for them. We back the current research project which is working with estates in the National Park to establish better counts.

In this case we understand the hare cull was part of a planned annual management cull. We recognise the public concern about the scale of culls and this emphasises the need for good information on populations and restraint in line with SNH’s advice in the meantime. In particular we expect moorland managers to ensure any culls do not threaten the conservation status of mountain hares.” 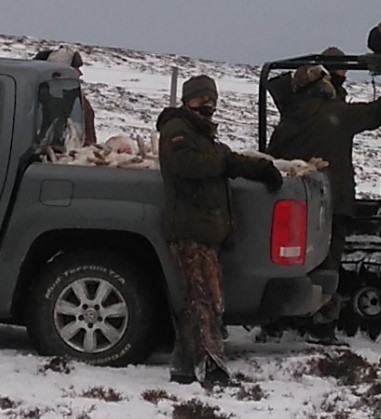 It’s really a non-statement. They had to say something, as a lot of people have been asking questions about how such a wildlife massacre can be allowed to take place inside the National Park. We thought the CNPA would come out strongly and condemn it, especially as we know they’ve previously expressed concern about how some elements of driven grouse moor management (i.e. the illegal persecution of raptors) “threatens to undermine the reputation of the National Park as a high quality wildlife tourism destination” (see here). Indeed, some people on Twitter have been saying they won’t visit the CNP while this level of wildlife killing continues.

However, far from condemning the latest mountain hare massacre, the CNPA’s statement almost suggests that this level of killing is acceptable because it was “part of a planned annual management cull“. Eh? Planned by whom? And is the use of the words ‘planned‘ and ‘management‘ supposed to imply that this wasn’t just a gang of gamekeepers off on another unregulated killing-spree but rather was a carefully-thought out cull, with mountain hare population figures rigorously and accurately assessed to ensure the cull was sustainable? If so, where are those figures, who collected them, and can we all see them, please?

Take out the words ‘planned’ and ‘management’ and you get: “The hare cull was part of an annual cull“.

The CNPA says: “We expect moorland managers to ensure any culls do not threaten the conservation status of mountain hares“. Really? Why would anyone expect moorland managers to voluntarily act in this way? This is an industry well-known for not adhering to some statutory wildlife and environmental legislation, let alone voluntary adherence to requests, as we’ve discussed before (here). How can the CNPA be so naive? Or is it just easier to put out a bland statement that really says nothing of any use than it is to properly investigate the circumstances of these mountain hare massacres?

It’s not very impressive. In fact it’s as unimpressive as SNH’s view, as reported in Rob Edwards’ piece in the Herald (here):

‘SNH agreed that it was difficult to judge whether the cull was excessive or not. It was aiming to improve its population estimates of mountain hares by 2017, and reiterated its call for “restraint on large-scale culls of mountain hares“‘.

In other words, SNH doesn’t have a clue about how sustainable this cull was, has no intention of trying to find out, is asking (not telling) the landowners to show some restraint, but don’t worry folks because there’ll be a better way of assessing mountain hare numbers by 2017. So until then lads, fill your boots.

If you’re as unimpressed with the CNPA’s reaction as we are, you might want to send an email to Hamish Trench, Conservation Director of the CNPA, to tell him what you think: hamishtrench@cairngorms.co.uk

You might also want to have your say on the future of National Parks, as suggested by Mark Avery last week (here). If the CNPA and SNH aren’t going to speak out against mountain hare massacres, you can!