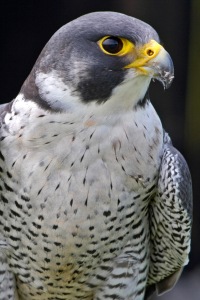 A poisoned peregrine has been found on a grouse moor in Stirlingshire, resulting in a police raid last Friday (20th Feb).

Incredibly, Police Scotland issued a press statement immediately after the raid. The speed of this publicity and their willingness to inform the public about this crime is warmly welcomed.

Here’s what the press release said:

Today Police Scotland executed search warrants on a shooting estate in the Stirling area after a Peregrine Falcon was found to have been poisoned by the banned pesticide Carbofuran.

“In July 2014, a member of the public contacted police to report a dead Red Kite on the same estate. Subsequent investigation revealed this bird was also poisoned with the same banned pesticide. There was no release of information to the general public at this time for operational reasons”.

“It is evident that an ongoing and intentional effort to poison wildlife is occurring at this location and we will be working closely with the relevant partners and using all investigative techniques at our disposal to identify the offender(s) and bring them to justice”.

“We would appeal to anyone who has knowledge of these incidents, or this type of criminality, to contact us and give any information that would assist us. We all have a duty to protect the environment and it is imperative these criminals are caught”.

“Information can be given by contacting 101 or by calling crimestoppers on 0800 555 111. Information will be treated in the strictest confidence if required”.

All quite interesting, especially as they have now revealed this poisoned peregrine was found on the same estate where a poisoned red kite was found dead last July. We blogged about that kite here and here, as we wondered why Police Scotland hadn’t publicised this crime and why SNH hadn’t yet enforced a General Licence restriction on this estate. With the discovery of this latest poisoning victim, we’ll be looking closely to see if, and how quickly, SNH now responds.