This is a photograph of a clam trap, also known as a snapper trap, butterfly trap and Larsen mate trap. They are used to trap corvids, although obviously the traps are indiscriminate and can also be used to catch raptors and other protected species. We’ve recently blogged about clam traps and the controversy over whether they are a legal or an illegal trap (see here).

The clam trap photographed here shows a slight variation of use. Usually the trap will be held open by a false perch that collapses when weight is applied (e.g. when a bird lands on it) which causes the trap to snap shut. In this photo the false perch is absent and instead, the trap is set to snap shut when weight is applied to the base (e.g. when a bird lands on the bait).

It’s quite incredible that SNH has not yet banned the use of these traps on welfare grounds. Just look at the photograph. Imagine if a large raptor (e.g. buzzard, kite, goshawk, eagle) is caught in one of these things. Apart from the injuries that could be caused to the bird when the trap snaps shut (they are designed to shut with speed and force so it’s highly probable that the bird’s wings will still be open and thus caught in the jaws of the trap as it snaps shut), the trapped bird then has to endure up to 24 hours inside this cage before it is checked by the trap operator. Would it be able to move inside the trap? Does it have a perch? Does it have water? Does it have shelter? All these are basic requirements covering the use of crow cage traps and Larsen traps where a decoy bird is in use. Why should a clam trap be exempt from these welfare requirements? Is it because there isn’t a decoy bird in use? What about the welfare requirements of the trapped bird, whether it be a target or a non-target species? It’s probably fair to say that it would be stressful for any large raptor to be caught inside one of these things, whether it’s injured or not, and to be trapped like that for up to 24 hours? That’s assuming the trap operator bothers to do the 24 hour check. In our view it fails on all welfare considerations. The general licences used to permit the use of crow traps also explicitly ‘do not permit the use of any form of spring-over trap’. What’s this then if it isn’t a form of spring-over trap? Some organisations have argued that it isn’t a form of spring-over trap…no prizes for guessing who that was.

Unsurprisingly, the Scottish Gamekeepers’ Association supports the use of these traps (see here and here) as does Scottish Land and Estates [formerly known as SRPBA] (see here).

Whilst we all wait for SNH to make a decision on the legality of clam traps….if you see one of these traps you are advised to report it immediately to the police, SSPCA and RSPB. As with the other crow cage traps, the clam trap should have an identification code attached along with the telephone number of the local Police Wildlife Crime Officer. See here for a discussion on the legalities of other crow cage traps and what to do when you find one. 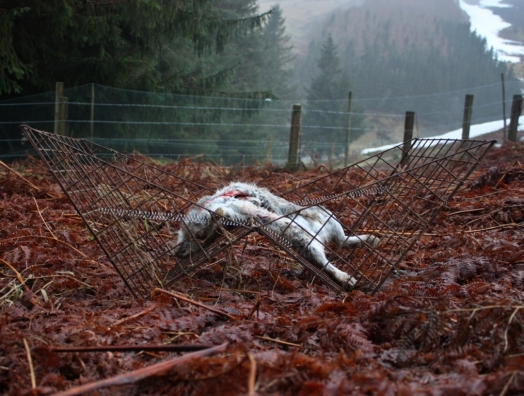 19 thoughts on “Photo: clam trap – why haven’t these been banned?”