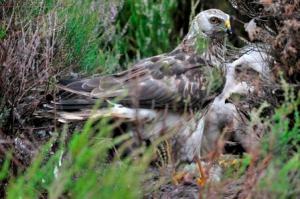 Following the blog posts of December 18th and 24th 2010 about the delayed publication of the long-awaited Hen Harrier Conservation Framework report, one of our readers emailed the Environment Minister, Roseanna Cunningham. Thank you Mike Price for sending us the government’s response:

Thank you for your email of December 24th, to Roseanna Cunningham MSP, Minister for Environment and Climate Change, regarding the Conservation Framework for Hen Harriers. I have been asked to respond on behalf of the Scottish Government.

We are aware of the report and of the delays that it has experienced on its way to publication. Although my understanding is that SNH have arranged meetings with stakeholders to go through their scientific concerns, I appreciate that this is frustrating for those who have an interest in raptors in Scotland and are waiting for the report’s conclusions to be made public.

We have been assured by SNH that the report will be published before the Parliament has completed consideration of the Wildlife and Natural Environment (Scotland) Bill and will be made available to the Rural Affairs and Environment Committee. While I can’t comment on the content of a report that is yet to be published, I assure you that the Minister and her officials look forward to reading its conclusions with great interest.

Meanwhile back in Gamekeeper World, the SGA has announced it is conducting a national wildlife survey on sporting estates, focusing on birds. SGA Chairman Alex Hogg says on his blog: “We know from extensive scientific studies that land which is managed by gamekeepers has some of the most prolific wildlife in the country“. Hmm, we also know from extensive scientific studies that land which is managed by gamekeepers is where raptors are persistently and illegally persecuted. The forthcoming Hen Harrier Framework report provides very clear evidence that the land where hen harriers are absent (despite it being apparently suitable breeding habitat) also just happens to be land that is managed as grouse moors. What an amazing coincidence! In fact, isn’t that also what the Golden Eagle Conservation Framework reported in 2008? Yes, I think it is. A cynic may conclude that the SGA’s national wildlife survey is simply their latest public relations offensive in an attempt to bury the devastating evidence of hen harrier persecution on Scottish sporting estates that will shortly be published for all to read. And yes, we have read the report – and it most certainly does contain damning evidence. We’ve considered posting it on this site but we will wait and hope that SNH keeps its promise and publishes the report sometime this month.

Alex goes on to encourage SGA members to participate in the forthcoming bird survey, and tells them that the survey form will only take “a short time” to fill in. Is that because most of the native birds have been illegally poisoned, or shot, or clubbed to death after being caught in a trap….?