Shocking new statistics show up to 260,000 animals killed each year on Scottish shooting estates to increase the number of grouse to be shot for ‘sport’

The League Against Cruel Sports Scotland has published the most comprehensive and robust field study of ground predator control on Scotland’s shooting estates. Over 15 months, an independent surveyor mapped the location and frequency of traps and snares set on seven shooting estates to calculate the true extent of animal killing as a result of predator control to sustain the driven grouse shooting industry.

Analysis of the survey data by a leading scientist concludes that up to a quarter of a million animals are killed every year to maintain high numbers of grouse for sport shooting, with nearly half of these non target species. The study also found that failure to comply with existing codes of practice is widespread on Scottish grouse moors, and that best practice guidelines produced by professional organisations that represent the shooting industry appear to serve little useful function.

Robbie Marsland, Director of the League Against Cruel Sports, Scotland said: “These figures have shocked and appalled us. This is the most comprehensive, quantitative study of predator control giving an illustration of the grim reality of Scotland’s grouse moors, where up to a quarter of a million animals are simply wiped out to ensure grouse numbers are kept artificially high.

Our report ‘Calculating Cruelty’ leaves us in absolutely no doubt that managing such large parts of Scottish moorland for an industry which makes a woefully low contribution to the economy is entirely misguided and outdated.”

Between June 2018 and September 2019 a surveyor, with over 20 years experience of game management recorded the scale, distribution and use of legal grouse moor management equipment and practices. Using the Scottish right to responsible access, the estates were walked and all ground was viewed so that the items being specifically surveyed were likely to be found. All ground was covered at least once with all tracks and watercourses checked carefully. The estates surveyed were had various intensities of management practices, and included:

The survey was carried out without the estates being notified so that the data were not biased by management practises changing as a result of the survey and no legally set trap or snare was interfered with in any way. This is the first time that such a widespread and detailed survey of estates has been undertaken. 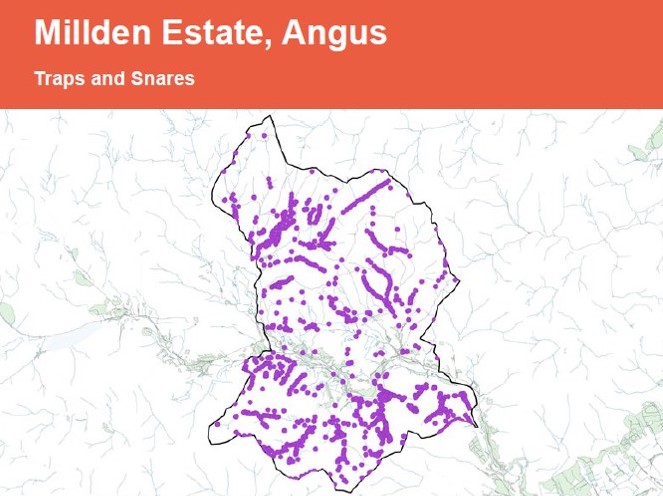 The report published by the League, is part of a series of reports by the various partners of Revive, the coalition for grouse moor reform, a campaign group bringing together social justice, environmental and animal welfare organisations. Since its inception in 2018 Revive has shone the spotlight on the circle of destruction surrounding driven grouse moors, campaigning for their radical reform.

Robbie Marsland added: “The enormity of the figures produced by the data in this report is simply staggering. The League and our partners in Revive, the coalition for grouse moor reform think it is unconscionable to kill any animal, let alone up to a quarter of a million, to ensure that hundreds of thousands of grouse can then be shot for ‘sport’.

Driven grouse shooting is surrounded by a circle of destruction which is Scotland’s hidden shame. This cruelty and willful disregard for the environment and our wildlife needs to stop once and for all starting with a complete ban on all snares and traps.”

The League has published two new reports, ‘Calculating Cruelty’ and ‘Hanged by the Feet until Dead’, both of which can be downloaded below:

Hanged by the Feet until Dead

A copy of both reports has been sent to every MSP in the Scottish Parliament.

There is also a short video highlighting the key findings of this study:

38 Degrees has launched a new petition, ‘Stop grouse shooting’s war on wildlife‘ which can be signed HERE

There has been the usual criticism of these two reports by the game shooting industry although so far this criticism appears to be focused on personal and defamatory abuse of one of the report’s lead author Professor Stephen Harris rather than any criticism of substance about the reports’ actual findings. This is what we’ve all come to expect – anybody who dares try to shine a light on the murky practices of this industry immediately becomes a target and attempts are made to smear, distort, misrepresent and undermine that person’s professional and personal integrity.

Read the reports for yourselves, look at the eye-watering number of traps recorded on some of these estates and judge for yourselves whether this level of intensive and largely unsupervised slaughter of wildlife, to facilitate a ‘sport’, is acceptable in modern Scotland.

You’ll notice Millden Estate in the Angus Glens was one of the seven estates surveyed, and also reported as the most intensively-managed of all seven. That won’t be a surprise to many readers as this area has been accurately described by Chris Townsend as ‘savaged, stripped and blasted land’ (see here for some shocking photos).

Millden has featured on RPUK many times and readers may recall the most recent Millden blog – last October there was a huge multi-agency raid for suspected animal fighting and during that raid a number of dead raptors were also discovered and as a result a gamekeeper was suspended (see here, here and here).