In sharp contrast to the pathetically inadequate Scottish Government’s response (see here) to the news that a poisoned sea eagle has been found on a grouse moor in the Cairngorms National Park, the Scottish Greens’ response is spot on:

The revelation that a White-Tailed eagle found dead in the Cairngorms is found to have been poisoned shows the Scottish Government must go further to tackle wildlife crime around grouse moors, Scottish Green MSP Mark Ruskell has said.

Police Scotland have confirmed the satellite tracked bird had been poisoned with pesticide as they investigate the crime.

[A police officer retrieving the poisoned corpse from a grouse moor in the Cairngorms National Park. Photo by Police Scotland] 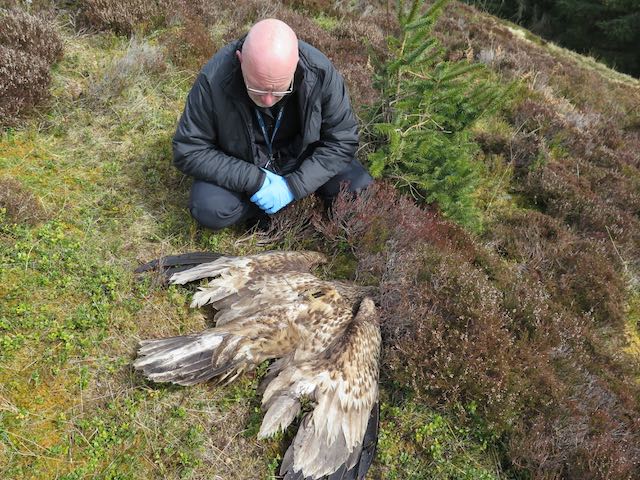 Greens environment spokesperson Mark Ruskell is the species champion for the White-Tailed eagle, also known as the sea eagle, of which there are only around 150 breeding pairs in Scotland.

“This is a very serious crime against a species reintroduced into Scotland 40 years ago after it became extinct. Sadly, this is only the latest in a long list of raptors found near Scotland’s grouse moors and I’m afraid recent tweaks to wildlife crime maximum sentences fail to address the central problem around detection and prosecution of these crimes.

There needs to be real action to address this war against wildlife. Land managers need to get a grip of this, but we’ve seen from the reaction to the Scottish Greens win on protection for mountain hares that the driven grouse shooting industry is resistant to even the mildest of reforms.

It’s time for the Scottish Government to ignore vested interests and respond to the Werrity review with a commitment to shut grouse moors down. The stark reality is Scotland is monumentally failing to meet its obligations in the middle of a global nature emergency.”

Thank you to all of you who have written to the First Minister (Nicola Sturgeon) and Environment Cabinet Secretary (Roseanna Cunningham) expressing your disgust and urging immediate action. It is clear that their inboxes have been deluged. Good, they need to be.

To email Nicola Sturgeon, please use this address: firstminister@gov.scot

To email Roseanna Cunningham, please use this address: CabSecECCLR@gov.scot