A group of young White-tailed Eagles have arrived in the south west, landing today at Kerry Airport from Norway.

The White-tailed Eagles are being released again in Munster by the Department of Culture, Heritage and the Gaeltacht’s National Parks and Wildlife Service (NPWS) as part of a Phase Two project to bolster the small existing breeding population in Ireland.

The new release phase aims to build on the successful re-establishment of this once extinct species over a three-year period (2020-2022) by releasing young eagles at three sites, including Lough Derg, the lower Shannon estuary and Killarney National Park.

The mission involved moving the young eagles – who had been monitored for a number of months – from Norway. They were taken to a waiting chartered flight at Trondheim Airport, for transport to Kerry Airport on a journey of four hours 20 minutes, and arrived this afternoon. 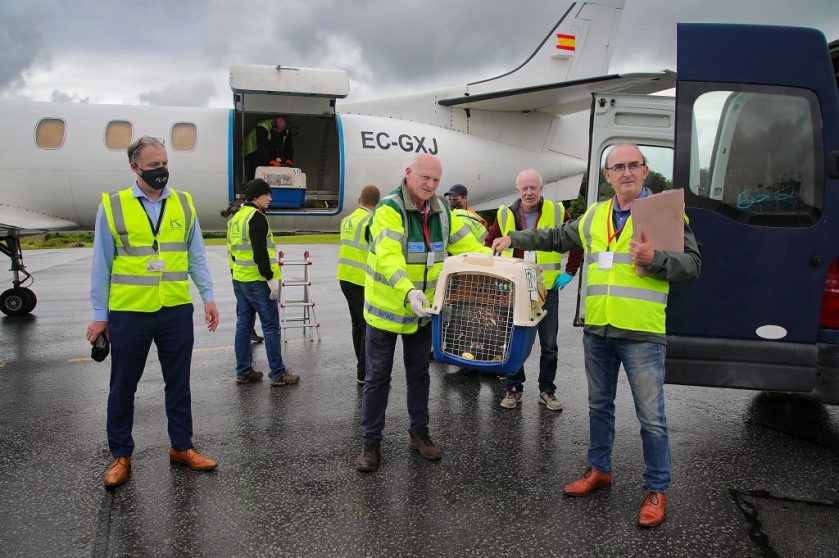 Minister of Culture, Heritage and the Gaeltacht Josepha Madigan, TD, welcomed the new arrivals: “This latest operation, under Phase Two of the conservation project, was an incredible team effort between the wildlife personnel both here and in Norway.

“Thanks to their logistical work, bringing the latest influx of White-tailed Eagles to these shores, the future is positive for the eagle, which had been extinct in Ireland for over a century. The latest conservation intervention cements the work already done in bringing these graceful birds back to our skies, and I would like to express my appreciation for all involved in lending this hand to nature.”

In 2020 it is planned to release 10 young eagles collected this summer in Norway split between the three Irish sites. These birds from this second release phase will provide an additional boost to the small Irish breeding population when they reach maturity.

Previously, 100 young White-tailed Eagles were released in Killarney National Park in County Kerry between 2007 and 2011. Birds from these releases subsequently dispersed widely throughout Ireland with first breeding in 2012 on Lough Derg, County Clare. Since then a small breeding population of eight to ten pairs have successfully fledged 26 chicks with an additional six chicks likely to fledged into the wild in Munster in the next few weeks.

Some Irish-bred eagles are now reaching maturity and starting to breed in the wild. However, a scientific review of the reintroduction project indicated the small population is still vulnerable to mortality factors such as illegal poisoning and the breeding population was negatively impacted by Avian Influenza in 2018 and storm Hannah in 2019. Thus it was decided to carry out this supplementary release to bolster the existing population.

Young eagles were collected under licence in June 2020 by the Norwegian Institute for Nature Research (NINA) and co-workers. Birds will be held at the sites in Munster before release in early to mid-August. They will be tagged before release to allow the project to monitor their progress and their integration into the existing Irish breeding population.

An important aspect of any such releases is cooperation with the farming communities in the release areas and where birds settle to breed. During the first phase of the release project, managed by the NPWS and the Golden Eagle Trust, a good relationship was established in the release and breeding areas with the farming community, so much so that farmers helped monitor birds and nests at some sites. The Phase Two release hopes to build on this relationship into the future to ensure that farming and eagles continue to coexist to their mutual benefit.

As well as bringing biodiversity and ecosystem benefits,  restoring this flagship species can deliver potential economic benefits. The re-establishment of breeding White-tailed Eagles at sites like Lough Derg and Killarney has proven hugely popular with local residents.

The positive economic benefits of ecotourism was experienced in Mountshannon, County Clare, when the first breeding pair nested within sight of the village in 2012, attracting thousands of visitors over the next few years. In 2020, a year when physical tourism has been non-existent due to the Covid-19 restrictions, live streaming of a White-tailed Eagle nest in Glengarriff, County Cork, has proven to be a huge virtual nature attraction, even making the recent BBC list of top 20 virtual nature attractions in the world. This programme and further reintroduction is a critical project in terms of Ireland’s biodiversity – reintroducing an iconic wild species that was exterminated by man – and will contribute significantly to the economic, tourism and local communities and indeed to human wellbeing. We are particularly grateful to the Norwegian authorities and colleagues for their generous cooperation.

The Irish White-tailed Sea Eagle Reintroduction Programme is a long-term initiative to re-establish a population of this extinct species in the Republic of Ireland managed by the National Parks and Wildlife Service (NPWS) of the Department of Culture, Heritage and the Gaeltacht and in collaboration with others, including in particular the Golden Eagle Trust.

Releases of birds (Phase One) saw 100 young eagles released over five years (2007-2011) in Killarney National Park, County Kerry. As Sea Eagles breed at about five years old it was expected that the first Irish nesting attempts would be in 2012/2013. In 2012 the first nesting attempt occurred in County Clare, the first breeding in the wild in over 100 years. In 2013, the first wild-bred chicks fledged successfully from a nest in County Clare. To date, 26 chicks have fledged from nests in Kerry, Cork, Clare and Galway with an additional six chicks anticipated to fledge from nests in Kerry, Cork and Tipperary in July 2020.

A live streaming nest camera was set up in 2020 at a nest in Glengarriff, County Cork, by the National Parks and Wildlife Service in collaboration with the Office of Public Works (OPW). This is available for viewing at: https://www.glengarriffnaturereserve.ie/sea-eagle-webcam/