Four days ago we blogged about the ‘disappearance’ of yet another satellite-tagged golden eagle, the 12th eagle in seven years to vanish in suspicious circumstances in this particular area managed for driven grouse shooting. 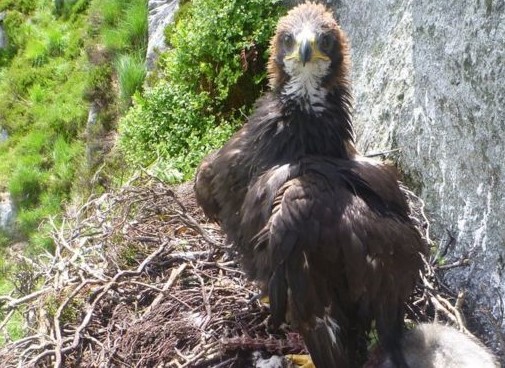 Here are some of the responses:

This golden eagle has disappeared in an area which has long been associated with the illegal persecution of birds of prey. We may never discover exactly what has happened in the case of this latest disappearance. But we do know the illegal killing of Scotland’s magnificent birds of prey continues – primarily in areas which are intensively managed for driven grouse shooting.

No-one should be in any doubt about my determination to act decisively to uphold the law and protect Scotland’s magnificent birds of prey. I look forward to receiving the Werritty Report into how we can ensure grouse shooting is sustainable and complies with the law, which is due to be published early next year”.

We’re in no doubt at all about Roseanna Cunningham’s sincerity on this issue. Like every other sane and law-abiding member of society, she’s appalled that this continues and is probably deeply embarrassed that it continues to happen on her watch, hence her announcement last May of the newly-commissioned grouse moor review panel. We all welcomed that news because finally, after many, many years, it seemed the Scottish Government was finally listening, was in full acknowledgement of the evidence, and was prepared to act.

But it seems from Roseanna’s statement that nothing more will be done for at least another year, and if truth be told, it’ll take longer than a year because as has already been indicated, if the Werritty Report does recommend an introduction of a licensing scheme, the Scottish Government will need to hold a public consultation before any changes are brought in. Can we afford to wait for another year, two years, three years? No, we can’t. The Scottish Government needs to get a grip and tackle the criminal element within the grouse shooting industry with speed and force. There’s absolutely no excuse not to act now.

UPDATE 20.00hrs: In email correspondence today with a constituent, Mr Ewing MSP said the Environment Cab Sec “has responsibility to make public comment on this [illegal raptor persecution] but I have done so as well“. If anyone has a record of this public comment we’d be happy to share it here. 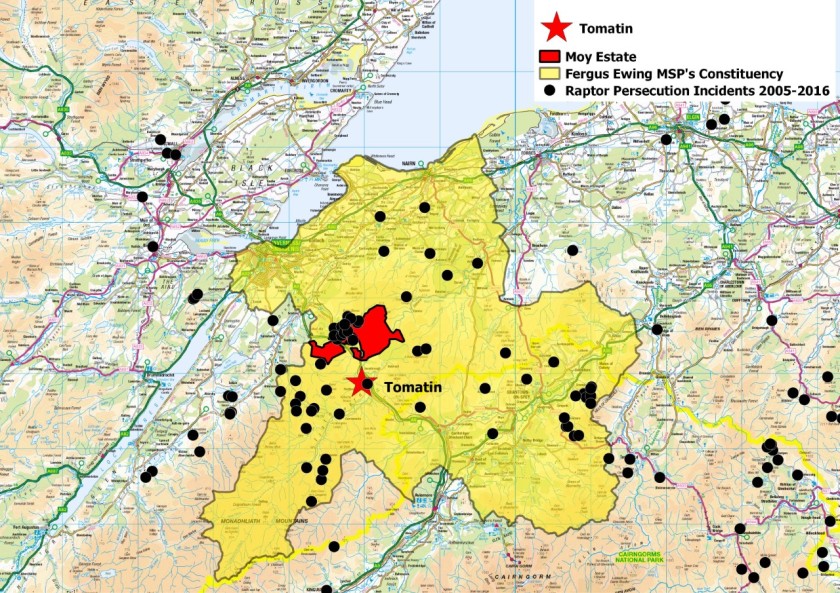 “RSPB has stated today that a young golden eagle fitted with a satellite tag disappeared three months ago in the Northern Monadhliath mountains. We have no hesitation in urging anyone who can provide information on the matter to contact Police Scotland.

We are, however, deeply concerned by the assumption by RSPB that this eagle is most likely the victim of a wildlife crime perpetrated on a grouse moor. Yet again, we see RSPB acting unilaterally as judge and jury without waiting for those professional experts in the police and the procurator fiscals’ office to reach an informed decision as to the actual facts. We believe this continual smearing of grouse moors actually runs the risk of being counterproductive and directly impacting all the good, productive collaboration that has taken place in recent years.

Incidents such as this absolutely do need to be investigated but it is for Police Scotland to lead investigations. They have very extensive powers to gather evidence as they see fit, and we would expect all our members to assist them in their enquiries.

To be clear, we as an organisation – and on behalf of our members – condemn all forms of wildlife crime. We are not saying that wildlife crime never occurs on land managed for grouse shooting and acknowledge that in the past, there were practices, including raptor persecution, that are simply unacceptable but which have declined markedly in recent years and this trend is borne out by the Scottish Government’s own statistics. We also note that RSPB itself describes the area involved in this case as one where eagles have done well in recent years.

Of course, more work needs to be done ensure the decline in wildlife crime continues and we are an enthusiastic member of the Partnership for Action Against Wildlife Crime Scotland (PAWS). It has been proven time and again that constructive collaboration gets the best results. Alongside this, we and numerous grouse shooting estates are active members of the Heads Up for Harriers project as well as being key drivers in the South of Scotland Golden Eagle reintroduction project.

Instead, what we have is a sustained effort to blacken the name of grouse shooting without evidence. It is perhaps no coincidence this is happening when the Scottish Government has instigated an independent review into grouse shooting which is ongoing at this very moment. Despite being a member in PAWS, we have seen absolutely no evidence or data from this eagle or from the recent case of Fred which disappeared in the Pentland Hills.

We are fully supportive of the government review into grouse shooting as set up by the Cabinet Secretary, its practices, and the many environmental, economic and social benefits it provides across rural Scotland. We are also fully supportive of the proposals within the Poustie report that recommends the strengthening of penalties with regard to wildlife crimes.”

This statement was met with deserved derision on social media.

“What we have is a sustained effort to blacken the name of grouse shooting without evidence“, declares Mr Johnstone. Without evidence? Really? Apart from the massively obvious fact that the circumstances of this latest eagle’s disappearance mirror, exactly, the suspicious disappearances of 42 other satellite-tagged golden eagles on or near driven grouse moors in Scotland, as detailed in the Scottish Government-commissioned report published last year. Is Mr Johnstone in open defiance of the findings of that report? If he is, then let’s have the details of his objections.

Once again, with tedious repitition, SLE tries to shoot the messenger (RSPB Scotland) and suggests that the investigation needs to be undertaken by Police Scotland. Perhaps he should re-read the RSPB’s press release which clearly states the police ARE investigating. SLE will also know that the RSPB would not have put out a press statement without agreement from the police. To suggest that the RSPB is acting alone and not in partnership with the police is a wholly disingenuous attempt to discredit the RSPB.

Mr Johnstone also argues that illegal raptor persecution has “declined markedly in recent years and this trend is borne out by the Scottish Government’s own statistics”. SLE was taken to task about this on Twitter by James Reynolds, Head of Media at RSPB Scotland, as follows: 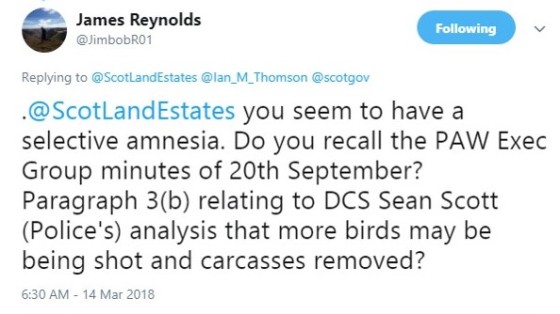 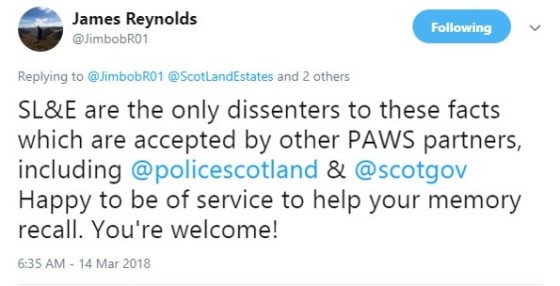 Mr Johnstone cynically infers that the RSPB released the news of this ‘missing’ eagle to coincide with the on-going review of grouse moor management. Ah, sorry, was this news release inconvenient? Hasn’t this argument been used before, with claims made that RSPB news releases on raptor persecution were timed to coincide with the start of the grouse-shooting season? Does it damage the industry’s failing propaganda campaign to portray itself as law-abiding and sustainable? Should the news have been withheld until after the review has been submitted next year?

There was one part of Mr Johnstone’s statement that interested us the most:

“We are not saying that wildlife crime never occurs on land managed for grouse shooting and acknowledge that in the past, there were practices, including raptor persecution, that are simply unacceptable….”

Could Mr Johnstone or anybody else from SLE please tell us which incidents on grouse moors, in the past, he now accepts as being confirmed raptor persecution crime?

“If anyone has information they should contact Police Scotland. If it is proven any harm has come to this bird and if it transpires there is evidence that that harm was the responsibility of an SGA member, they will be subject to our very strict wildlife crime disciplinary code.

It is becoming increasingly impossible to gain full transparency surrounding these incidents when those holding the data are the tag owners who then dictate process and message.

At the same time, these tag owners are actively lobbying to persuade government to legislate against grouse moors.

If investigations were to have the best chance of success and procedural transparency, this data would be held centrally by an impartial body who could look into everything such as the reliability of the tag, who fitted it, the evidence of criminality which exists and the full range of other factors which could cause a mechanical device to stop signalling after many months in the wild.

When a tag from a Hen Harrier stopped signalling on one of RSPB’s own nature reserves in the Cairngorms National Park, the charity stated the last known location of a tag was ‘only an indication of the broad general area’ where that bird was spending time.

That being the case, the public deserve to see the hard evidence which exists that the lost signal was down to grouse management and not any other cause such as a faltering tag, natural mortality, eagles fighting over territory or any of the other land uses in the broad general area which include farming, forestry and wind energy.”

‘The legal process deserves respect’. Good grief!!!! We can hardly be bothered to respond to this unmitigated tosh from the SGA. Let’s just look at what happened the last time the SGA was given access to the data of a satellite-tagged golden eagle (see here) and leave it at that.

On a brighter note, in response to the news of this latest satellite-tagged eagle to go ‘missing’ in highly suspicious circumstances north of Tomatin, the Shooting Times tweeted this: 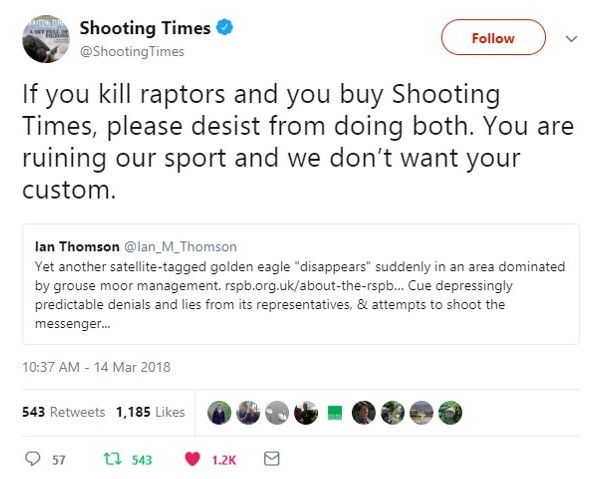 Whether you agree with shooting or not is irrelevant. The Shooting Times deserves much credit for showing unprompted condemnation and leadership. Perhaps the Editor can be invited to serve on the PAW Scotland Raptor Group in place of the SGA (who are currently refusing to attend meetings), then we might actually start to see some progress.