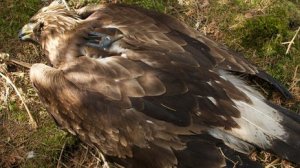 Six months ago, a dead golden eagle was found close to a lay-by on a quiet road in Aberdeenshire. The bird’s satellite-tracking data showed it had remained motionless on an Angus grouse moor for 15 hours, before inexplicably moving 15km north to the lay-by, in the dead of night, where it was found dead several days later. A post-mortem conducted by the Scottish Agricultural College laboratory in Aberdeenshire concluded that the eagle had suffered two broken legs due to trauma “that could be consistent with an injury caused by a spring type trap“. The SAC said the severity of the eagle’s injuries “would prevent the bird from being able to take off“.

This incident was not reported in the press until September 2012, four months after the eagle’s carcass had been discovered (see earlier blog on this here). Notably, the news was not released by Tayside Police, or Grampian Police; it was the RSPB that went public on this.

Since then there has been much confusion and muddying of the waters surrounding this case. As soon as the RSPB’s press release hit the national media, Environment Minister Paul Wheelhouse tweeted this:

26th September 2012 @PaulWheelhouse: This is a terrible story of an eagle suffering a lingering death – anyone with info please contact the police. He linked his tweet to this BBC news story.

It seems that like the majority of us, the Environment Minister considered this eagle’s death to be linked to a criminal offence. Why else would he have urged people to contact the police with information?

The public’s response to the media stories resulted in many people writing to the Environment Minister to express their outrage at the illegal killing of yet another golden eagle. The Minister’s response in early October was baffling; despite all the evidence to the contrary (sat tag data, corpse found, post-mortem results, and a long, long history of illegal raptor persecution linked to game management practices on grouse moors), as well as the inference from his earlier tweet that he believed this eagle’s death to be the result of a criminal act, the Minister’s aide said this:

“The reports may suggest that the circumstances of this incident were suggestive of an offence however there is no hard evidence and it remains possible that there is an alternative explanation” (see here for earlier blog on this).

This statement led to further angry letters to the Minister, and on 24th October his aide wrote the following response to one of our blog readers:

“You have commented on the Minister’s letter regarding the incident involving a young golden eagle in Aberdeenshire. Please allow me to clarify. The reports may suggest that the circumstances of this incident were highly suggestive of an offence involving illegal persecution. However, whilst that may be the most likely explanation, there is unfortunately no hard evidence to that effect. In the circumstances therefore it is not appropriate to comment on this case as an example of illegal activity. However, clearly the RSPB have offered a reward for information and it remains possible that this may yet be treated as a criminal matter” (click here to read the full letter in the comments section of an earlier blog on this).

So here we are in November and it is still not clear whether this case is being treated as a criminal investigation:

Wildlife crime, and specifically the illegal persecution of raptors, has been identified as a priority issue by the Scottish Government and the Scottish Police. We’re repeatedly told that raptor persecution incidents will be robustly investigated and the perpetrators brought to justice. Given the above bullet points, are we reassured that this is the case? Where’s the transparency? Some might argue that this is a deliberate attempt to suppress the figures concerning the number of illegally-killed golden eagles in Scotland. The question to be asked is very clear and very simple:

Is the death of this golden eagle the subject of a criminal investigation?